Just when I resigned myself to more waiting, another parcel had arrived from Shinei. Only one more to go from their pre-Ebay-boot-out time, and the last one will be the most epic! But I'm not showing what I won until the item is safely in my hands. So stay tuned! :)

Shinei actually said that this kimono was unwearable, and that it had a hole in the sleeve. I didn't see any holes in photos, and didn't really see anything else unwearable about it, so I decided to take my chances. Once it arrived, I spent a good 5 minutes looking for the said hole, and yes it's there. It's right on the part where the sleeve is touching the hanger, so it's absolutely not visible in photos. It's going to be very easy to fix, so major yay. Otherwise, this kimono is in perfect condition. 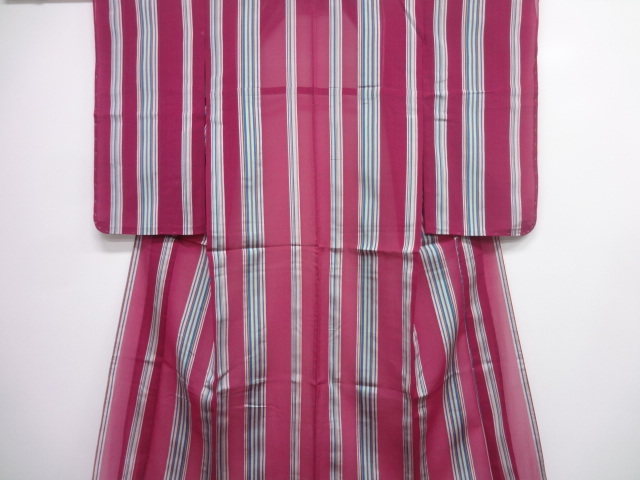 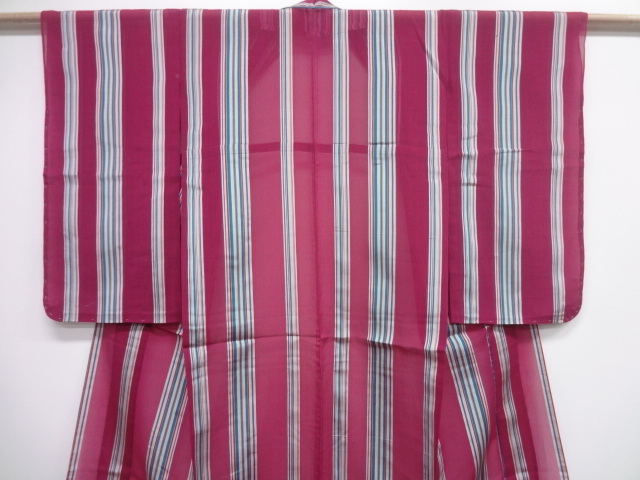 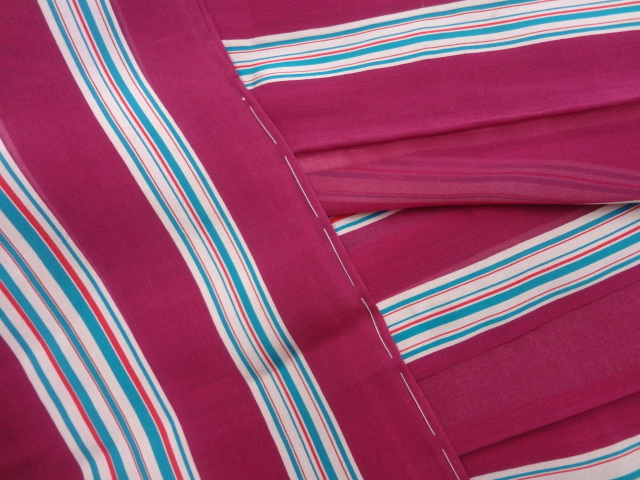 Hey, look! More chuya obi! This one is kinda plain, but the other side makes up for it. Although I bet it will look great with some of my busier kimono. In the bright sun I thought it was dark blue like in the pictures, but now that I'm looking at it inside the house, it's deep purple. 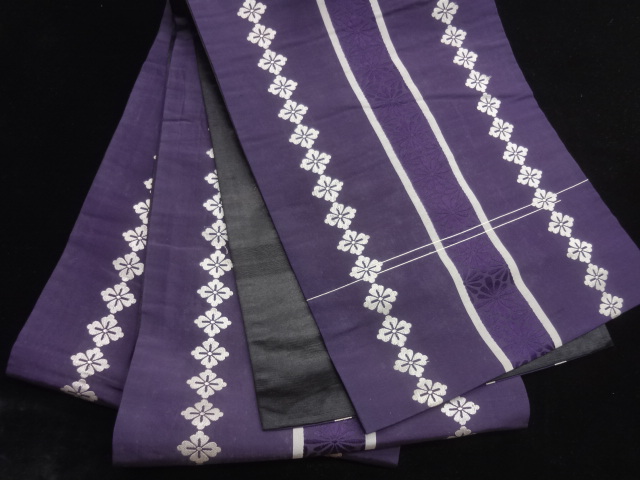 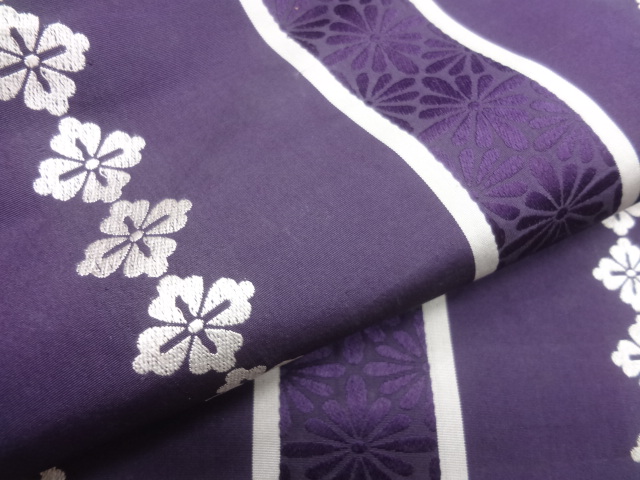 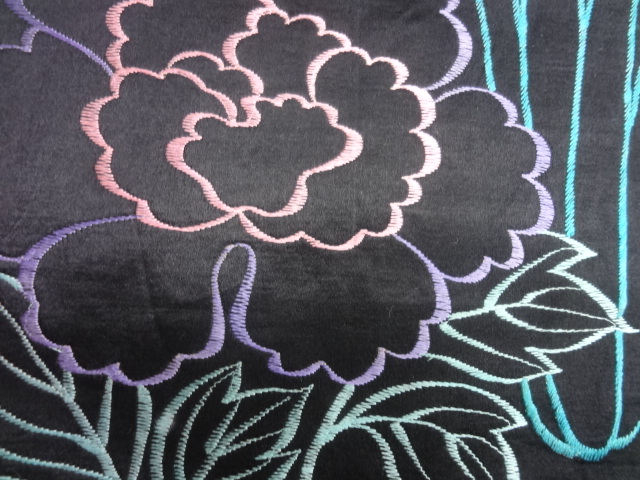 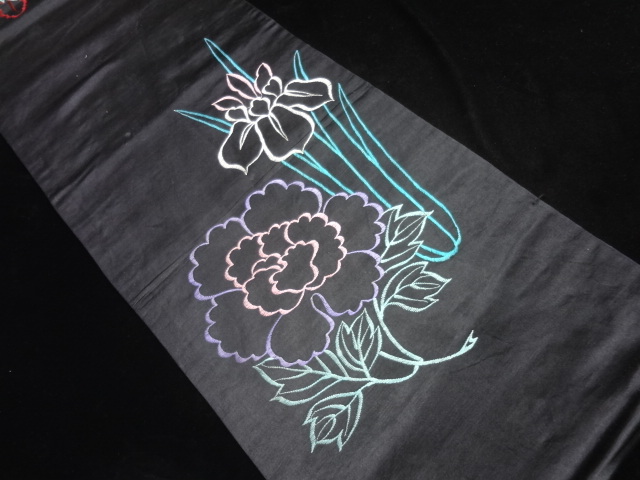 I'm way too excited about that sha kimono!

Just before Shinei got booted off ebay, I ordered some stuff from them. This is one of the three packages that I had on order.

First is a vintage omeshi kimono, and yes more stripes :) The color is a lovely brown-ochre which I love so much. I think my love affair first started with the actual name, ochre, back when I was in Art School in Ukraine. Then I fell in love with the shade itself. I love the addition of bright stripes too, it makes this kimono seem so much more lively. 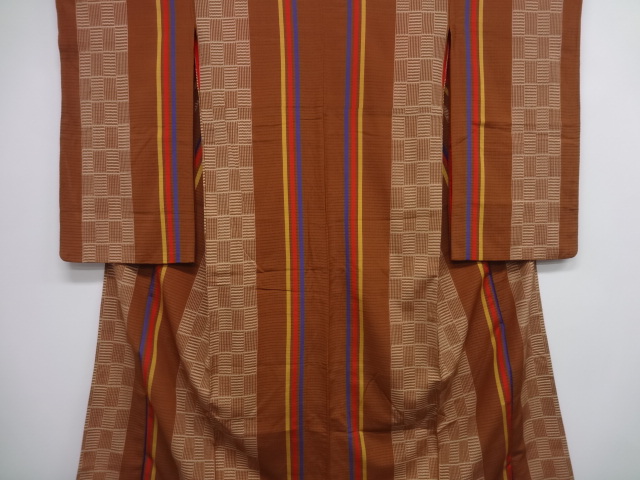 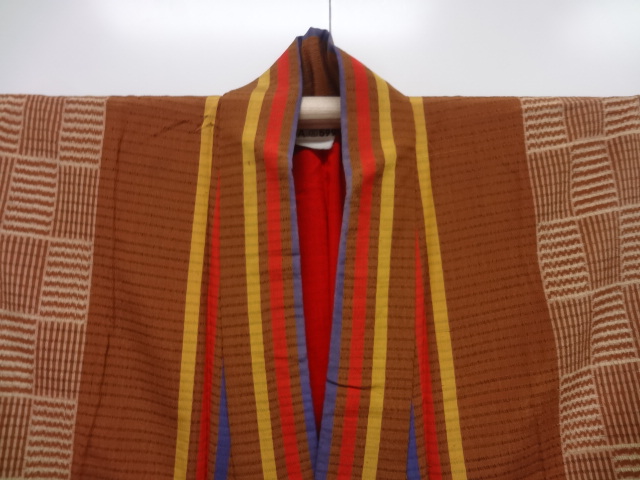 The texture is great too, you can see some of it here. 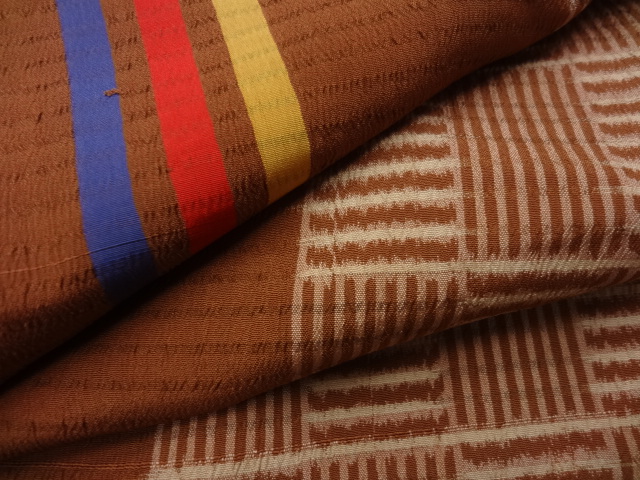 When I bid on this chuya obi, I was thinking that I'll use it for a very vintage type outfit. I'm still not sure if I actually like it... but it's growing on me! The patterned part is a very rough feeling silk, which I absolutely love. Plus, the other side is pink, which I don't have in my chuya collection yet. 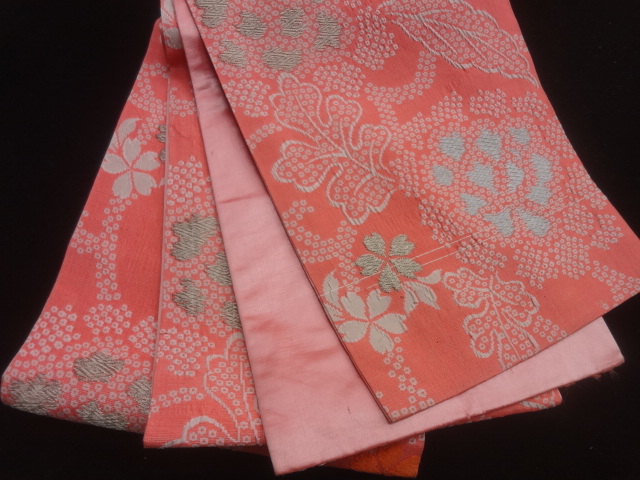 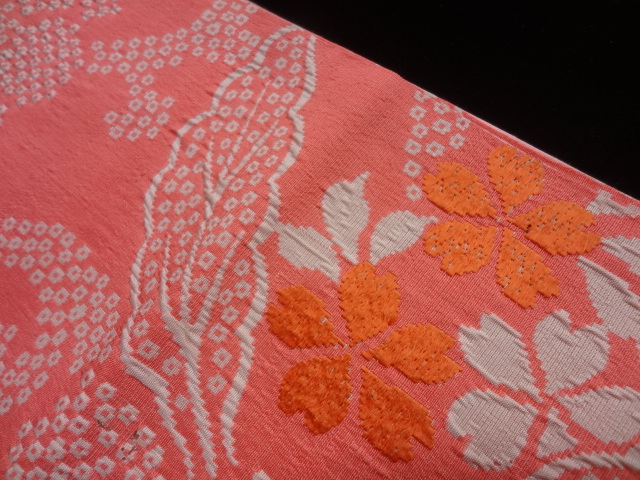 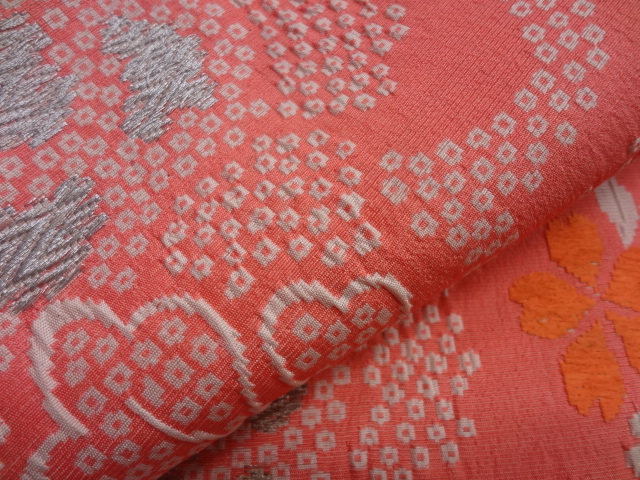 Show me your latest purchases! 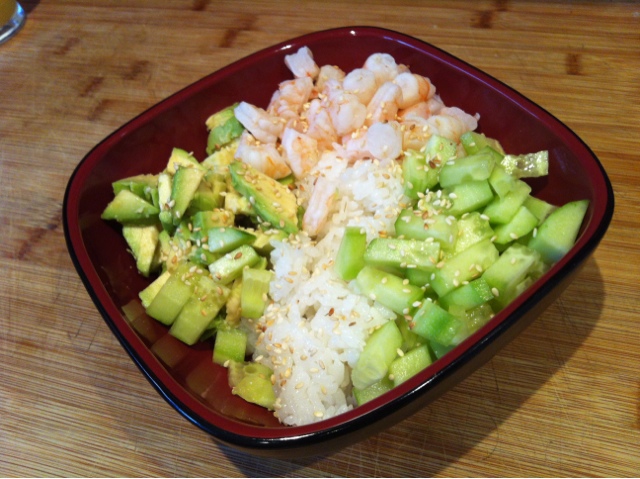 Today I have something pretty different for you, since it's not my usual kimono post. Instead, I have a fairly easy and yummy recipe that my husband and I had accidentally discovering while making sushi, and which now became one of our favorite recipes. Of course, I've only been talking about this recipe to anyone who's willing to listen for I don't know... 6 month now? I even converted Hong to it, and she made it at home several times now! Well I figured it's time to share the greatness!

Just to give you an idea, these are the rice vinegars that I have at my house at the moment. The left one (Mizkan Sushi Seasoning) is the most expensive and "hard to get" one because it's not sold at my base Commissary, so I have to buy it at the Japan Centre in London. It is also my favorite, so I use it for sushi rice only. The other two I can buy at the Commissary, so I use them for shrimp. Of course, I can also make sushi rice vinegar from scratch, but I'm lazy.

Also, I want to point out that I HATE avocado and this is petty much the only dish when I can eat it fresh. When combined with other ingredients, the taste is not overpowering but very nice, so do give it a chance if you also hate avocado. It's good for you! 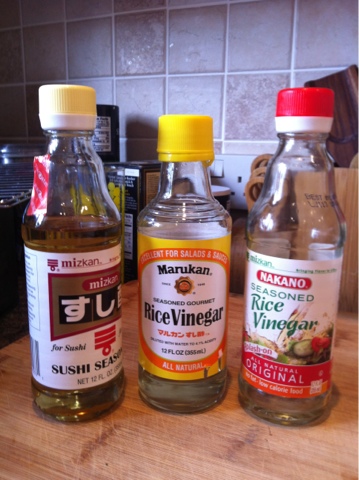 Step 1: Make sushi rice.
This is pretty important, as I've tried this dish with regular white rice and it just doesn't taste the same. To make sushi rice, just follow the recipe in your sushi making book, if you have one. If not, this is how I make it:

- 1.5 cup sushi rice, washed.
- 2 cups water.
- Either use a rice cooker, or cook it on stove top for about 20 minutes on low (reduce heat after the water boiled).
- Put your rice into big dish. (Don't worry if you don't have a "proper" wooden dish for sushi, I don't have one either. The one below is actually a wooden salad dish that I bought at TKMaxx. Don't even worry if you don't have a big wooden salad dish, at this point you can use anything. One time I used a roasting pan for cooling the rice down... Yes, it's not "proper", but I see no reason to buy a new dish if you're not going to make sushi rice that often. After I figured out that I do make sushi rice fairly often, I bought me a better dish, but until then use what you have!)
- Pour 1/4 cup of seasoned rice vinegar over your rice, gently turn it over with wooden spoon, fan it like crazy with a fan (you know, one of those you can buy at any Asian festival. Magazines work too when in a bind), turn it over again, fan like crazy again, repeat until the rice cooled down to room temperature (I have to say, that this amount probably overseasons the rice, but I found that it doesn't really matter because at the end it tastes very good anyway. When I actually make sushi rice for actual sushi, I follow the recipe in my book). 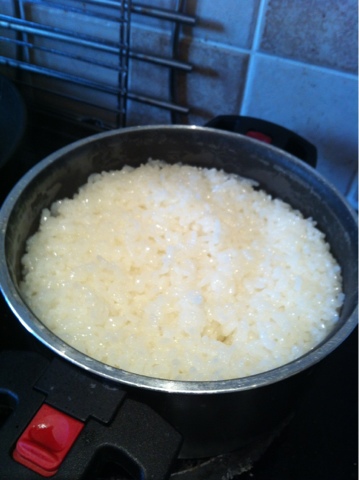 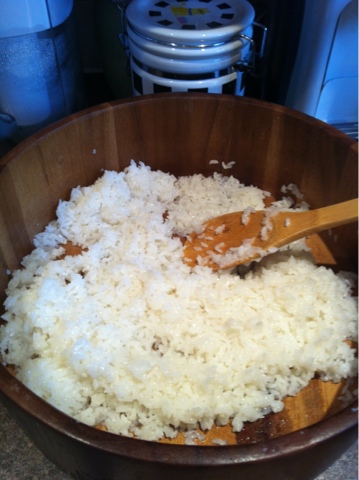 Step 2: Cook shrimp.
I buy the UNCOOKED bagged shrimp at the Commissary, I think about 20-22 count to LB, but you can buy whichever one you want as long as it's uncooked. If it's peeled, even better. If it's frozen, de-freeze it first or it won't taste that great.

- Boil 1Qt of water + 1 cup of seasoned rice vinegar (I don't even bother with measurements, I pour however much water I think I'll need and dump anywhere from half a bottle to whole bottle if I have a lot of water. As long as it smells strongly of vinegar I'm good with the water to vinegar proportions).
- Put shrimp in the water.
- Immediately take the pot off, cover and let stand for 3 minutes.
- Drain shrimp, let it cool. 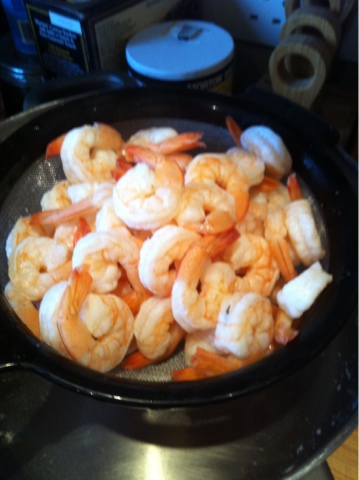 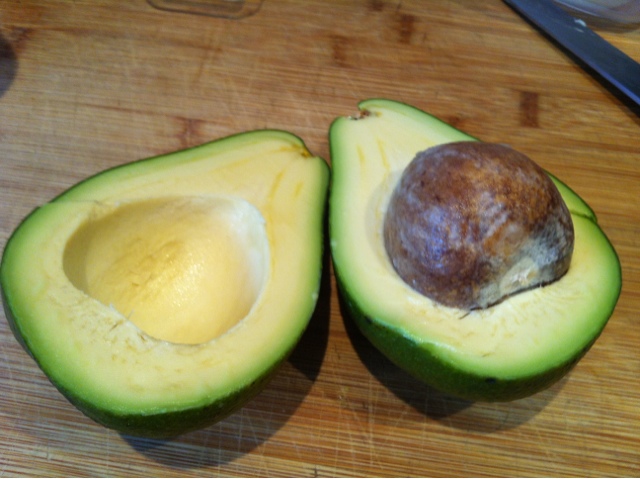 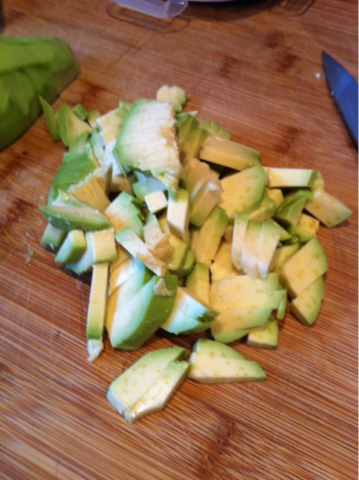 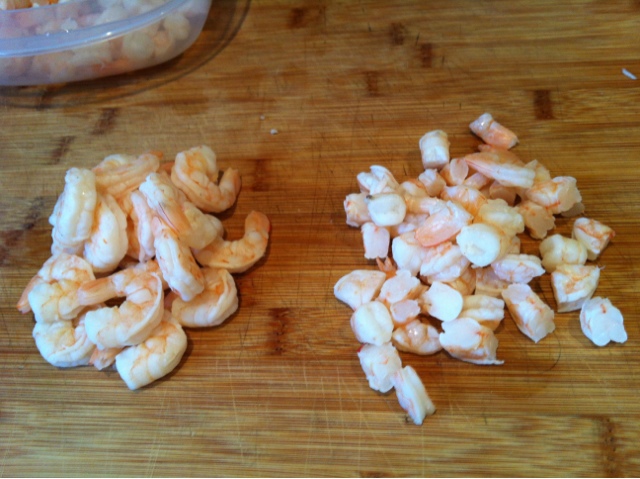 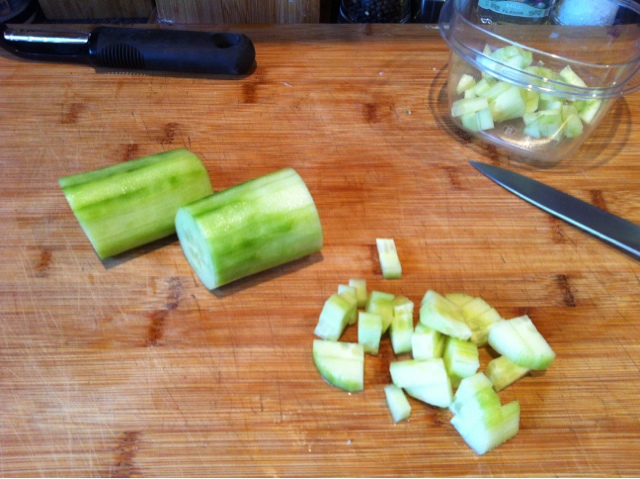 Step 6. Enjoy!
Couple scoops of rice, arrange shrimp, cucumber and avocado on top, sprinkle some roasted sesame seeds if you want, and you get some epic yumminess! 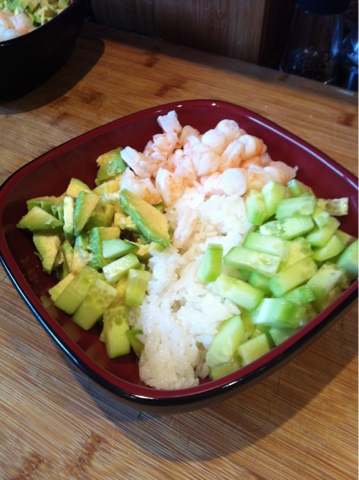 That amount usually lasts me for 3-4 meals when I'm alone, but with my husband we get 3 meals out of it. I keep all the ingredients in the separate containers and just add however much needed once I'm ready to eat. Remember, you can adjust the amounts of ingredients to suit your fancy.

Let me know if you try making it, I would love to know what you think :)

What I Wore to Lesley Downer Lecture 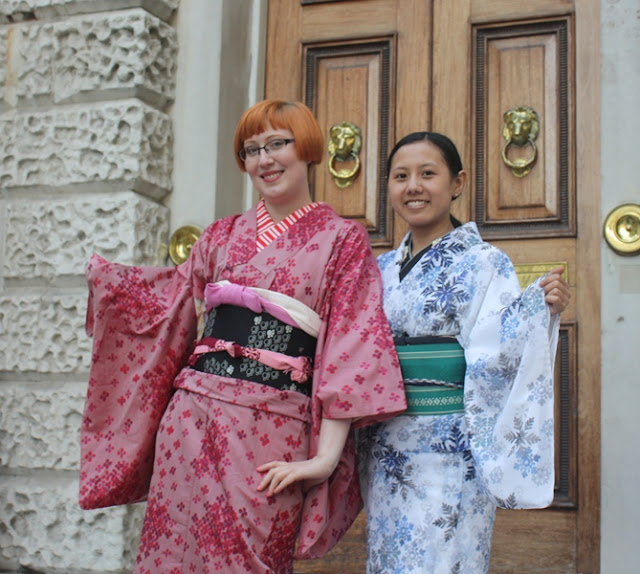 On Monday Hong and I went to the Oriental Club in London for Lesley Downer lecture. The event was free, but reservations were a must, although when we got there, about a third of a room was empty. Lesley Downer talked about her research and the background story for her newest book, Across a Bridge of Dreams, which just came out in the last few weeks.

The story is set in the post Meiji Restoration Japan, and is sort of a Japanese Romeo and Juliet story. I took a Japanese history class last summer, so I was especially interested because I really like Meiji Era. I knew the general events she was talking about, but of course Lesley researched more in depth on certain things that she needed for her story. Overall it was very enjoyable and I will go to any other talks or lectures that she gives. I even got my precious Women of Pleasure Quarters: The Secret History of Geisha book signed by her. I much prefer the UK edition title though, because US edition is kinda misleading. Oh well, nothing I can do about it.

After the lecture, Hong and I had us some dinner at Yo-Sushi, and what would you know, it was a Blue Monday too! I usually avoid Yo-Sushi because it runs pretty expensive while still leaving me hungry every time I go there (those conveyor type places are so tricky!), but this time I could "pig out" at a reasonable price. Beef tataki anyone? That's pretty much all I ordered.

As usual, the weather in England is pretty unpredictable so I didn't even bother picking out any kimono to wear until the day of. I had a rough idea of what I wanted, and thankfully it turned out to be the perfect thing. I was afraid it's going to rain, so I even brought my rain coat, but it didn't and I left it in the car at the tube station. The less stuff to carry, the better! So for kimono I picked my newest vintage hitoe, which I've been meaning to wear for a while. It's another one that's very thin, so it's perfect for warm days. 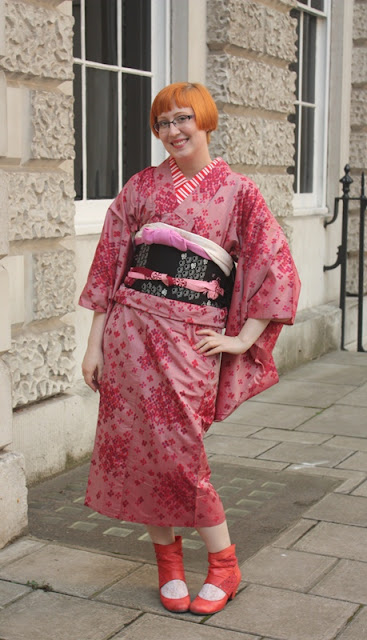 I ran into a slight problem with which shoes to wear. I only have so many shoes that I wear regularly with kimono, partly because of how they look, and partly because of the comfort level. There is no way I'm going to go for a full day in London in shoes that will be uncomfortable. Unfortunately, I have even less summer-appropriate shoes to wear! I opted for my trusted red boots to play off the haneri colors, figuring it's England, it's probably going to be ok. Well, I was wrong! I was actually too hot and all because of my stupid feet! I'm weird like that, if my feet are hot, I'm hot. If my feet are cold, I'm cold. So I have to keep my feet at a comfortable temperature in order to be comfortable, and this time they were not comfortable. Good thing that no one can tell that in photos. ;P 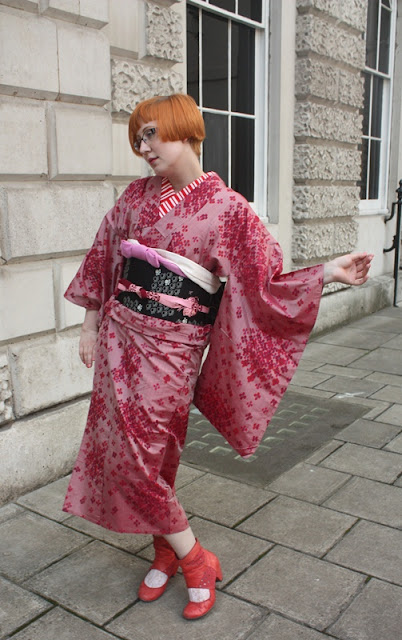 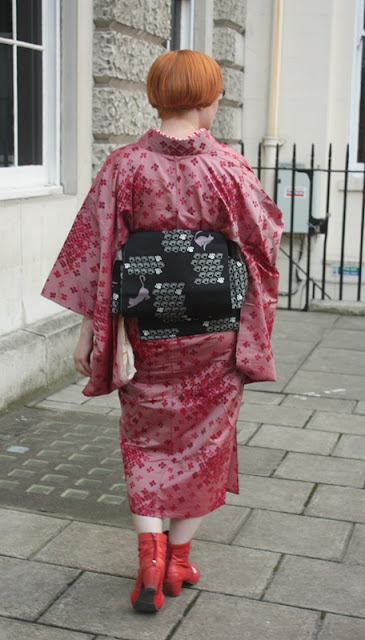 The obi I wore was the one Hong gifted to me a while back. She knows me all too well! I thought this obi will be perfect with this kimono, because of the subtle play off in colors. Those kitties are lavender, and there is plenty of pink-lavender shade in kimono. It's kinda hard to see, but the middle of flowers have these gray-lavender dots which matched the color of kitties pretty well.

I thought of wearing red and white obiage, but at the last moment I changed my mind to the bright lavender one. I don't wear that obiage nearly enough, so I thought it was a perfect opportunity to wear it. The obijime is one of my newest ones, probably my favorite from the whole lot I got. 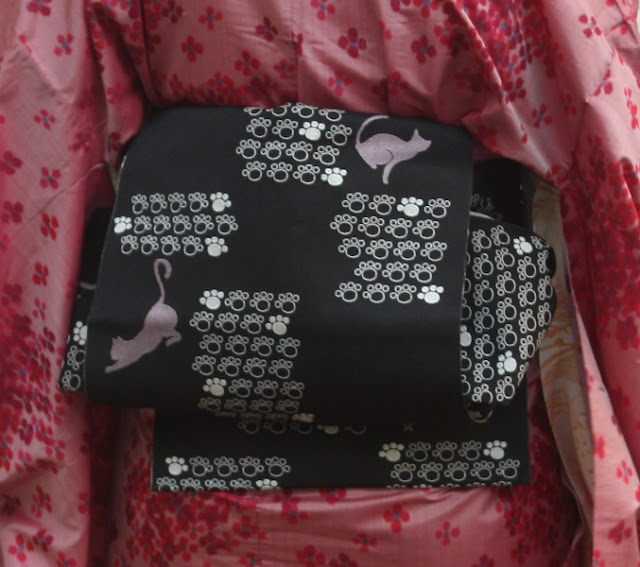 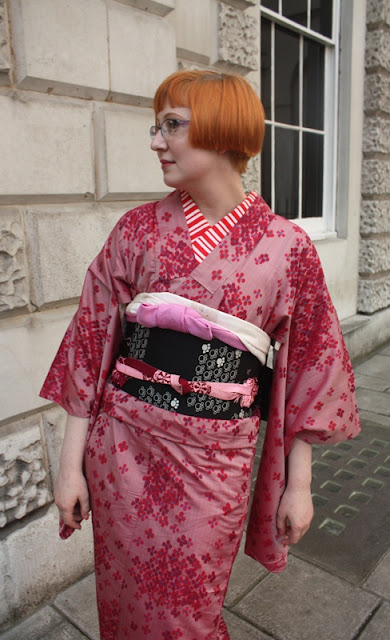 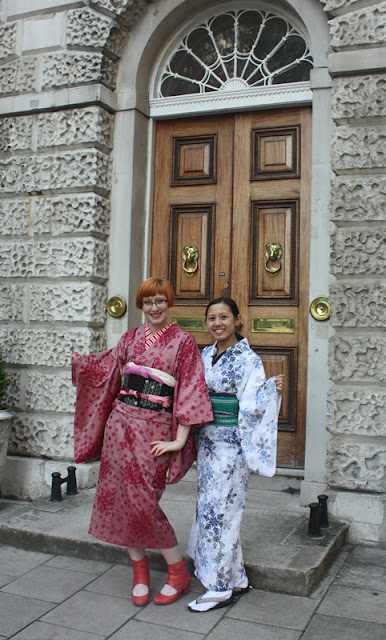 While we were taking photos, I got my first semi-negative comment about my outfit (that I could remember, I might have gotten more at some point). One of the lecture attendants was watching us, with a big smile on her face, giving us thumbs up. Then she looked at me and said something along the lines of "Great outfit, if not for the shoes" to which I replied with a big smile on my face "The shoes are just PERFECT!". It's a little thing, but it shows that not everyone likes that style.