Wearing kimono two days in a row? Kudos to me for that :) Yesterday I went to London EXPO for the first time, and after my earlier disappointment in London Film and Comic Con, I decided not to cosplay but instead wear my kimono. Even if I get disappointed yet again, at least I wore a kimono right? Well... I wasn't disappointed. :) I actually liked it a lot! Yes it was crowded, yes it was full of people in (crappy) costumes but I expected it at a convention. The only thing that I didn't like was that they held their presentations, talks and workshops in the main convention hall, where it was so loud that you couldn't hear anything. I miss US conventions where workshops get their own separate rooms. I will definitely come back again, this time in a costume tho. ;P

I decided to go all out for the con. Lots of makeup, false eyelashes, crazy hat, you name it. :) For kimono, I wore my black hitoe with bright yellow abstract obi and red obiage and obijime. Of course, being me and just having to be all matching, I also wore red tabi and gloves, and yellow zori. ;P 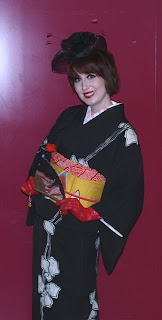 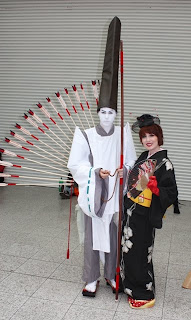 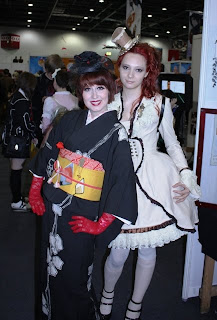 Sadly I had a bad kitsuke day that day :( It just didn't want to work for me! My juban sleeves were showing, obi was crooked and the right side of kimono kept slipping down. And I also learned not to wear dark hats with my current hair color because they just get lost and hard to see.

I wish I could have met up with UK kimono club there. For all my suggesting of meeting there, I only briefly saw Isla and Hong and then didn't even see them again at all :( However, the highlight of the con for me was meeting Svetlana Shmakove, the creator of Dramacon. I wanted to meet her ever since I read the first volume. No, actually probably ever since I saw her drawings in Christopher Hart's How to Draw Manga series. I didn't know what time her signing was, and actually didn't even know where it was held. On my way to ask, I stopped by Tokyopop booth and long and behold, there she was! About to leave lol. She stopped to sign her book for me, and we chatted in Russian for a few minutes. Turns out she likes kimono too, and even owns several of them. Overall, she is super cool and I'm extremely happy because I got to meet her :) :) 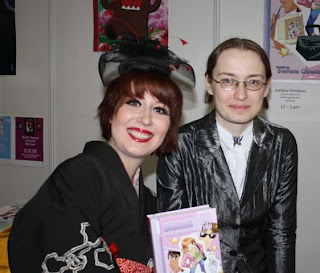 Our little (or maybe it's big) base doesn't get a lot of Japanese, or even Asian, related events but May is Asian Pacific appreciation month, so at least in May we get something. And this year I got an opportunity to participate in their fashion show too :) It was sort of a short notice, I think from the time I found out about it till it actually happened, only 1.5 weeks passed. I volunteered to dress up 5 people, which I thought would be reasonable enough to do in 2 hours. And up till the day before I thought I will have no volunteers, since no one replied to my and organizers emails. The day before I found out that I will actually have 2 volunteers, but because it was even shorted notice I decided to go simple with their outfits.

The first volunteer wore my pink/purple hitoe komon with my brand new dark purple obi. Sadly I don't have any shots of the back of the obi, because then you would be able to see that the design on obi sort of mirrors the design on kimono :) I didn't bother with proper tabi, since I wasn't sure about her shoe size so I just went ahead and gave her my stretch tabi. At least those are one size fit all lol. The kimono looked like it was made for her! And the color was very good for her too :) That dark purple obi made the whole outfit a lot more mature than I expected. Considering that I literally put it together 30 minutes before I had to leave, I didn't know what to expect.

My other volunteer was a 13 year old girl. Her mom emailed me saying that her daughter would love to model a kimono. I got the email a day before, so I really didn't want to bother with digging out my kimono and juban. Instead I went an extra super easy route of..... yukata! Plus 13 year old is still a kid, and I really didn't want to trust my kimono to a kid I never met. After all yukata are washable lol. Good thing too, because right after I put it on her, she disappeared to hang out with her friends and we had to look for her later. But since she was wearing a yukata and not a full kimono getup, I wasn't a least bit concerned.

Originally I was thinking of wearing this outfit to London EXPO, but changed my mind at the last minute. The hat I have one was specifically bought for this outfit too, I thought it would fit with it nicely :) I got a lot of compliments, and even made a new Japanese friend. 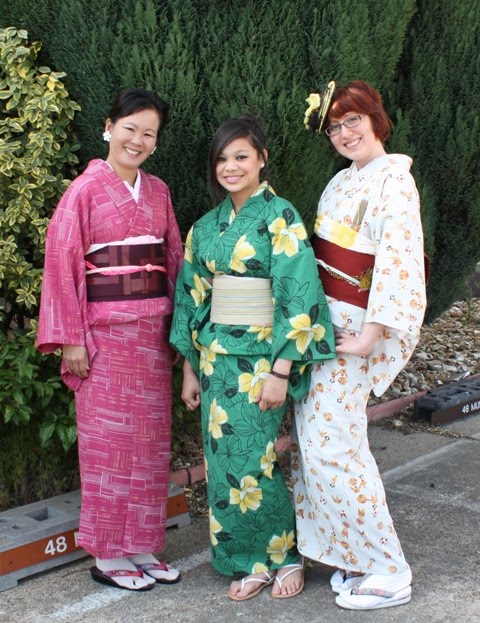 I don't have any photos of me alone! GASP! Looks like I'll have to wear that outfit again soon and took more photos :) 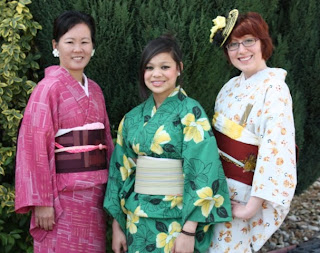 So I'm a little anxious right now. I just found out about it thanks to one of IG members posting about it, and I really really REALLY want to go! However the tickets almost sold out already, even the most expensive ones! And I'm afraid to reserve 2 tickets only not to find anyone to go with me :( :( :( It's such a perfect opportunity to wear a kimono too!

I posted on my FB, IG and even messaged one of my friends who would be possibly interested in going. And now I wait..... :(
Posted by Lyuba-chan at 7:31 AM 1 comment:

After almost 6 month of looking (pretty much right after I got my first job here), I finally was able to find something close to what I was doing back in FL. Sure it's not insurance, but I started out as a receptionist/administrative assistant there too. Starting Monday I will be working front desk at the local Child Development Center, which means hello weekends and federal holidays! :)

I am very excited and I'm finally starting to feel like myself again. Now I just need to find friends that share my interests in kimono and cosplay, and life will be even better :)
Posted by Lyuba-chan at 12:08 PM 3 comments: