No... sadly it hadn't happened yet, but that is not to say it will not happen soon :) I was very inspired by Ichiroya's recent post about Kimono de Jack events held in Japan, and I want to be able to experience the same thing where I live. Who said we had to live in Japan in order to have Kimono de Jack? :)

Kimono de Jack was started by 11 kimono enthusiasts from Kyoto, who were concerned that there were not enough occasions to wear kimono anymore. So in order to combat the problem, they decided to create their own event or Kimono de Jack. The first event was held on May 7, 2010 in Kyoto and was advertised by Twitter. Since then, Kimono de Jack spread across Japan and is now held in several regions.

So far I've created KimonodeJackUK twitter account, so that I can also advertise it through Twitter. Later in the week I'm hoping to get a new blog up, specifically for the Kimono de Jack London. Ideally I would love to have it once a month, which I think is pretty realistic. 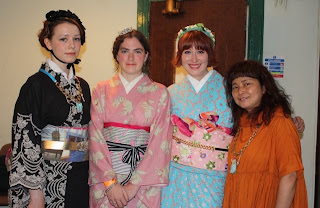 
Overall the festival was.... actually have no idea. It seemed better than the one in February, and there was food (cuz I could smell it haha), and more stuff to do. But I spent my whole time either backstage, or taking photos so I'm not sure. :) I did however had a LOT OF FUN! I'm really glad I went there, especially because I got to meet a real kimono designer and wear kimono 'couture'.
Posted by Lyuba-chan at 9:56 PM 1 comment:

It's only a week away, but I am still contemplating if I should go there... The last (and only) one I went to in February was a HUGE disappointment! But..... one of the guest for this festival is Yumi Yamamoto, who is a kimono designer, and I would love a chance to meet her. Or at least see her kimono.

And so I quit my job.

Yup, the one I was trying to long to get. The one that finally got me my weekends off and allowed me to wear pretty clothes and pretty shoes. Yup, that one. I turned in my resignation notice last Tuesday, and my boss suggested that I move to a different 'branch' to see if I like it there better. Well I did, and today I said so, but in about an hour she called me back saying that the managerial transfer is not possible so I can either A. go back or B. keep my resignation notice. I choose to quit because I do not want to go back.

Oh sure I could have sucked it up and stayed there, but at what point does it become OK to dread going to work? And really, it all boils down to conflicting personalities, but at what point am I the ONLY one at fault. I was told that I am rude and interrupt all the time, that I always have to have the last word in conversation, that I repeat things and it sounds like reciting, that when I tell someone that I'm going to lunch it is too much like reporting because they know my schedule, and they know when I go to lunch. It got to the point where I started talking less, because I didn't want to offend anyone. I started trying to 'escape' the front desk by doing something away from it. Every one of my mistakes, even little ones, were pointed out to me.... and sometimes with the words "this happened before". Really? Then why am I only hearing about it NOW? Or telling me that they thought I was a 'fast learner' because I said so.... (when I brought up that I might be interrupting to repeat stuff when I'm trying to make sure that I understand instructions). Yes fast, but not INSTANT learner, I do need to take notes you know?

Finally I started thinking that it was all my fault for not learning faster, for not knowing the names and faces of all kids in the center, for being insecure in my decisions. And then last Monday it got to the point where I just broke down and said I had enough. My personal happiness and sanity is more important to me, and when a job makes me THAT miserable... I need to leave.
Posted by Lyuba-chan at 9:39 PM 6 comments: