Yesterday was one of the best days of my life when it came to kimono outings. I couldn't attend June's Kimono de Jack in Stoke-on-Trent because I already made plans with my husband for that weekend, so having an outing yesterday was perfect! 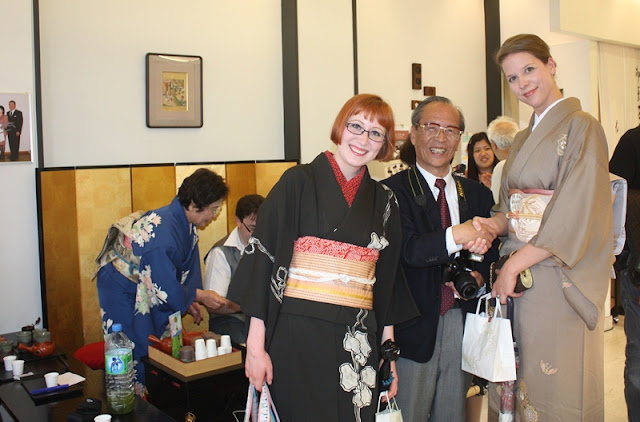 Actually Talleke and I were talking about hanging out for a while, and yesterday seemed like a perfect day. Both of us were off, had no plans so we've made plans to go to Caviar House & Prunier in Piccadilly area. I was obsessed with that place ever since I saw it on the way from Hanami in April. 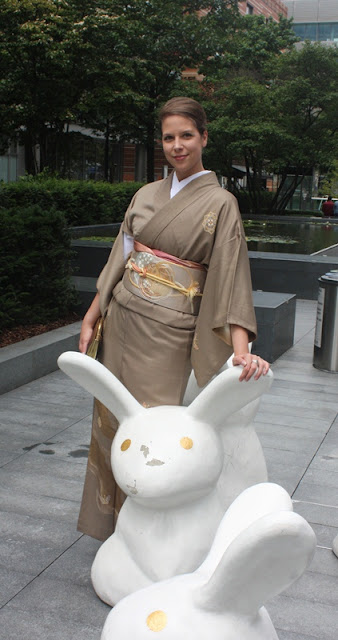 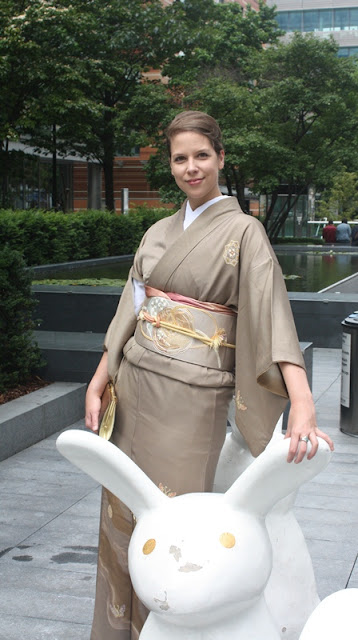 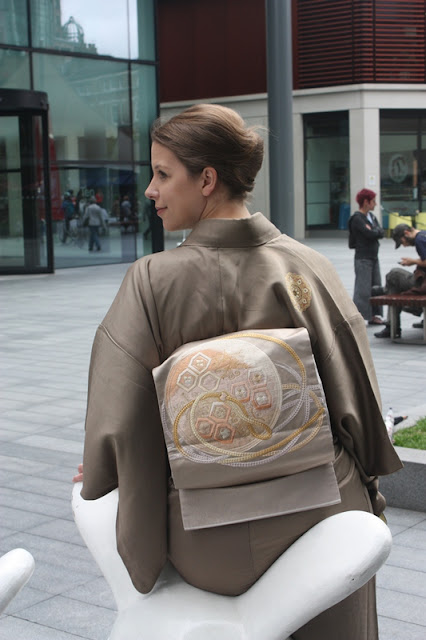 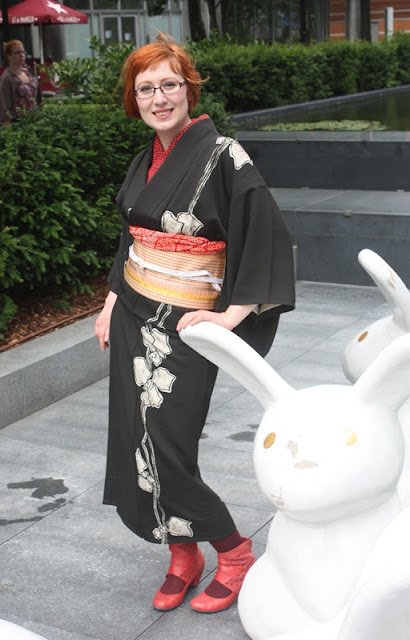 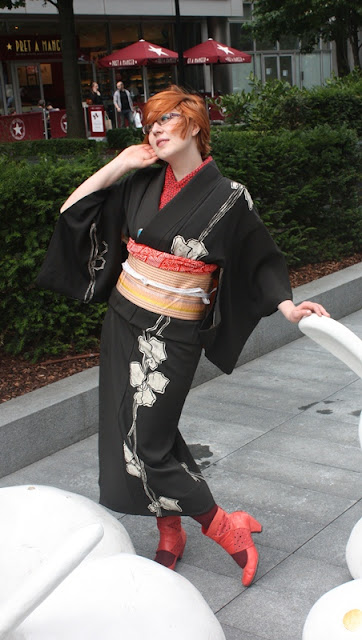 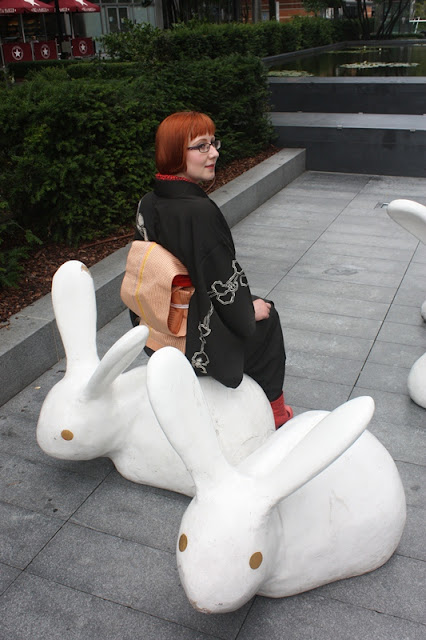 Before going to Caviar House we stopped by the Okinawan Day in Spitafields Market. I went there last year with Hong, but it was an ok event. Actually, I think it was their first year so I couldn't hold it against them too much, plus there are definitely a lot less Okinawan event than Japanese events. Well, this year it was MUCH better. Still it's no London Matsuri, but I think next year this could be a Kimono de Jack event. Still, there were a lot more food stalls (with yummy food) than non-food, but oh well. Our kimono, as always, got us a lot of attention and everyone were so excited and welcoming. We even got interviewed on camera, and I really hope we will get to see the footage! There was supposed to be a tea ceremony demo at 1:30, but we decided against waiting for it because we were not sure how long it will take to get to Piccadilly.

Sure enough, tubes were TERRIBLE! We took one look at the lines and decided to take a taxi. I had never taken a taxi in London before, so I was all super excited to ride in the 'old' cars. Talleke promptly corrected me, saying they were not old, but 'classic'. So with experienced wave of her hand, Talleke flagged us a taxi, and off we went trading various taxi stories on the way. I think the driver enjoyed my rendition of crazy taxi rides from Ukraine. :)

Caviar House was smaller than I expected, but the food was still yummy! I ordered their special which included caviar, foie grass and salmon. It was a nice taster of everything, since I never had any other caviar (other than salmon), definitely never had foie grass. Had salmon before, but what the heck! It's nice to have some posh dining once in a while!  Talleke picked a bottle of wine for us, so by the end we were a LITTLE tipsy but super happy. I think she got a kick out of me telling her that she is gorgeous accompanied by this Lyubaesque move of my hand. Yup, I meant every word and she still not allowed to argue with me, but I don't think it would have came out just as funny if I wasn't tipsy......

Full and happy we set out towards Minamoto Kitchoan, aka the bestest evilest place on earth aka wagashi shop, we stumbled upon some REAL fun! We didn't know, but that was the day when the CEO of Otsuka Green Tea Co., Ltd. and his wife (we figured that out by the fact that their last names and addressed are the same lol), the Tea Ceremony Master were visiting to promote tea ceremony and green tea (?). Or maybe they were just visiting, but either way there was an area of store set up for tea ceremony. AND WE GOT TO PARTICIPATE!!

It started out with normal stuff, us walking around and drooling over wagashi while noticing some stuff wearing kimono out of the corner of our eyes. Sure enough, in 0.34 seconds we got approached about our kimono, and told all about the CEO, Mrs. Green Tea and asked if we would like to try some. OF COURSE WE WANTED!  Mrs. Green Tea, and this is what we were told she is called in Japan, since she is a famous Tea Ceremony Master, performed a small green tea ceremony for us. I had macha before, so I thought I knew what to expect of their tea. WRONG! This was the BEST macha I ever had! It wasn't bitter at all, when I know that macha is known for being somewhat bitter! It was almost creamy! Ok, I don't know how it is possible for macha to be creamy, but that's how it tasted to me. And it was without even a hint of bitterness! I heard about different qualities of tea in Japan, but this is the first time I got to experience it in person and being able to tell. (I have to admit that my taste buds are not very good :( so this just shows how good the tea was) Or maybe it was all because I ate that super expensive sweet right before, although I don't know if that had any effect since there was at least 5 minutes between eating it and drinking the tea (from all the talking).

We thanked Mrs. Green Tea and Mr. Otsuka, posed for obligatory photos, gave out my business cards, asked for photos to be emailed, and went to complete our shopping. Talleke bought herself the yumminess which is wagashi, and I got me 70g of Otsuka Powdered Tea. I wish I could have bought their best quality tea, but at £38 for (I think because packets looked the same to me) 70g it was out of my price range :( So I settled on £9 for 70g packet instead. I think this tea will last me a long time! :) I need to figure out how to store it properly, there is a green tea blog I follow so I'll re-read his posts to see what he says.

On our way out we lingered around the store talking to Mr. Otsuka and Mrs. Green Tea, and got asked if we wanted to try performing tea ceremony. OF COURSE WE WANTED! Talleke went first and I took whole bunch of photo, one time almost tripping on Mr. Otsuka because he was crouching down taking photos too. I felt really bad about it LOL. Everyone told Talleke that she was a natural with stirring :) 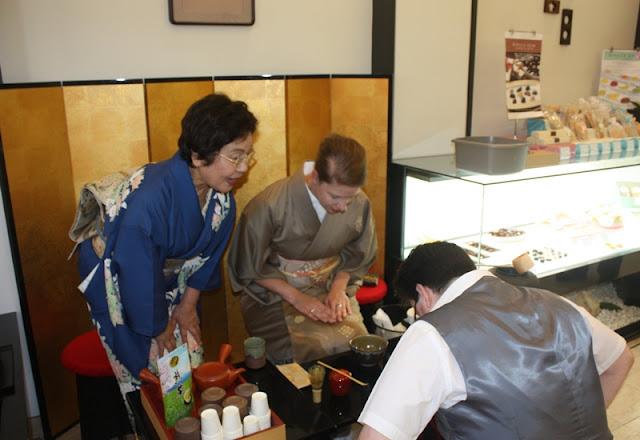 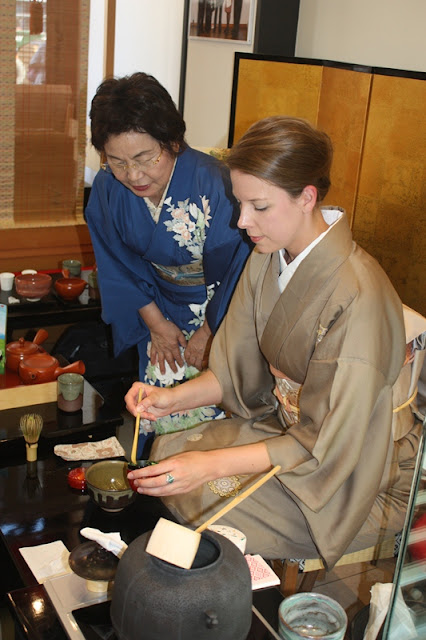 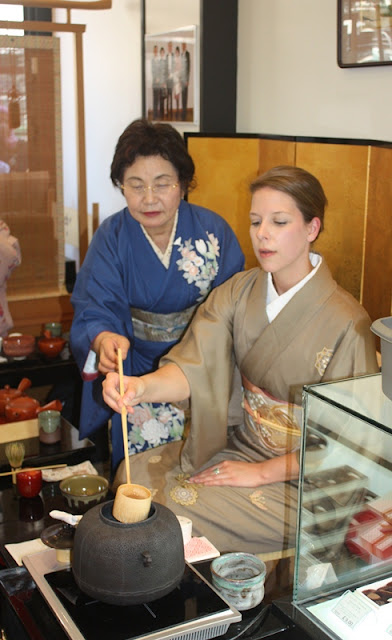 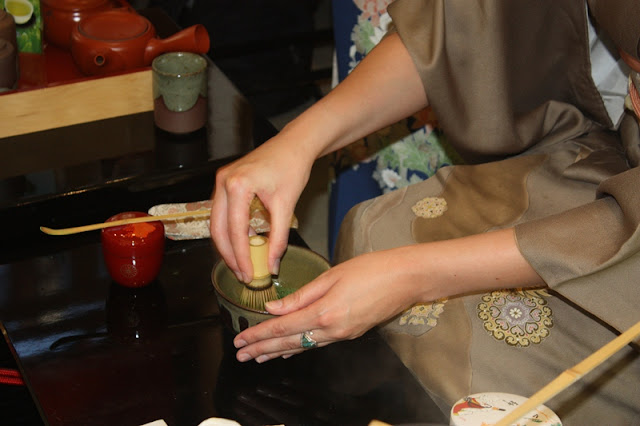 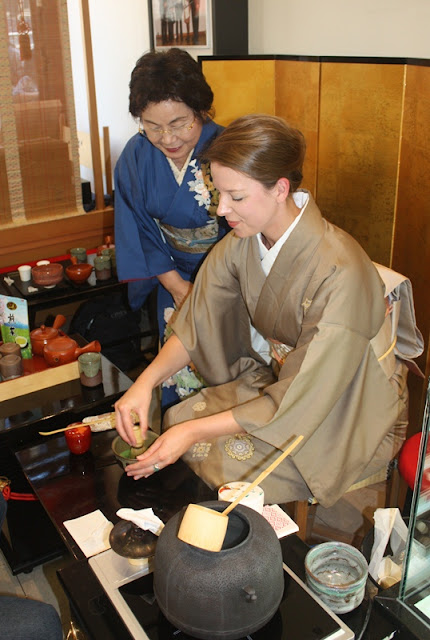 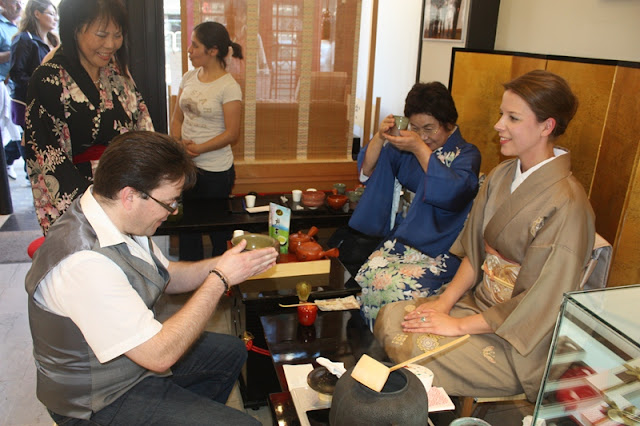 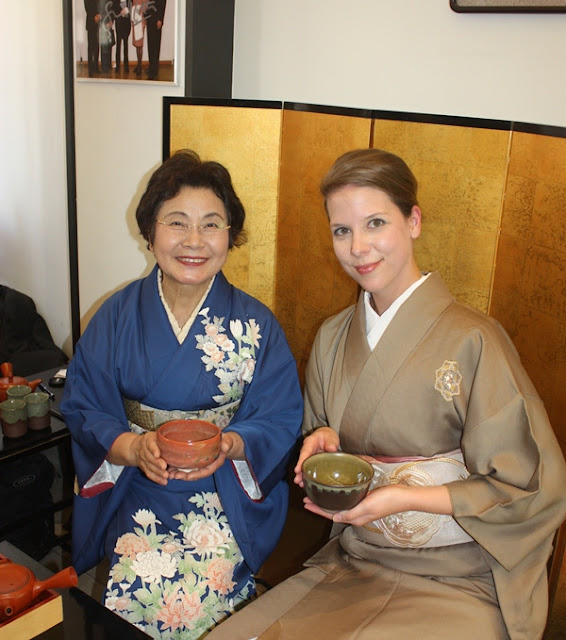 I went next, and my guest was Mr. Otsuka! My hands were shaking when pouring water lol. Actually my hands were shaking the whole time period, and I pretty much proved to myself the 2nd time that I'm not cut out for the tea ceremony. I made a whole bunch of mistakes, but Mrs. Green Tea was so nice about correcting them! Actually all of them were so welcoming, so nice! If I had a chance to take tea lessons with her, I probably would too. 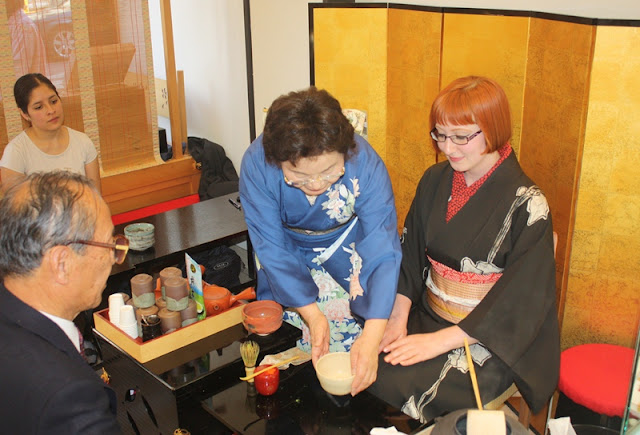 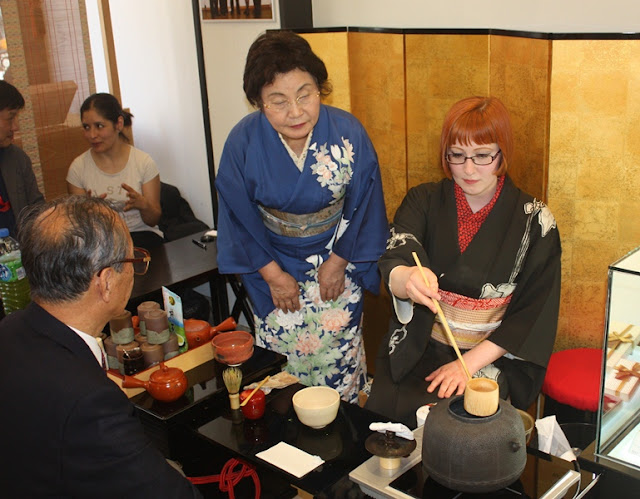 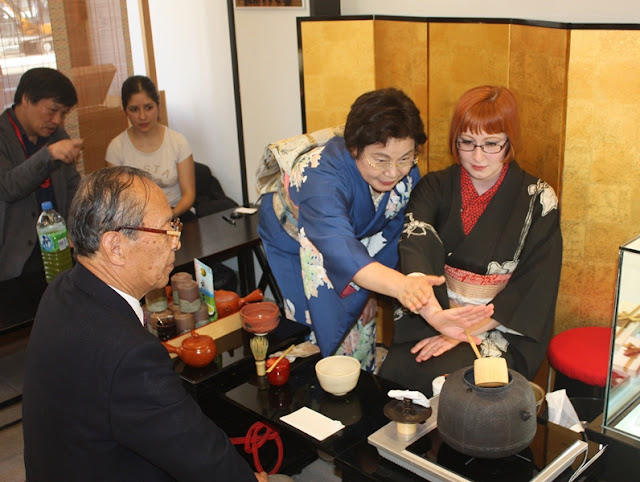 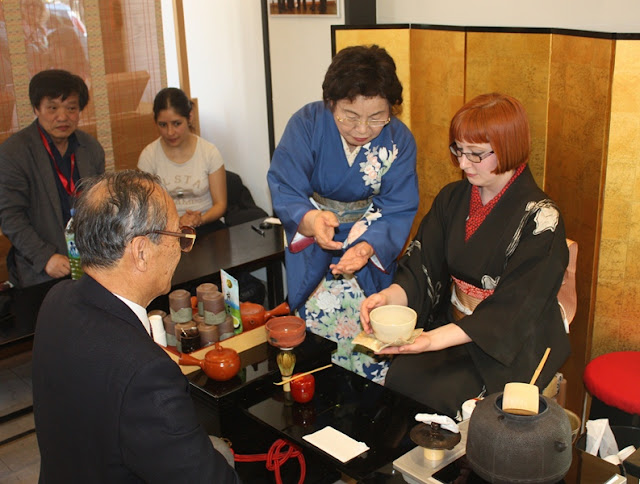 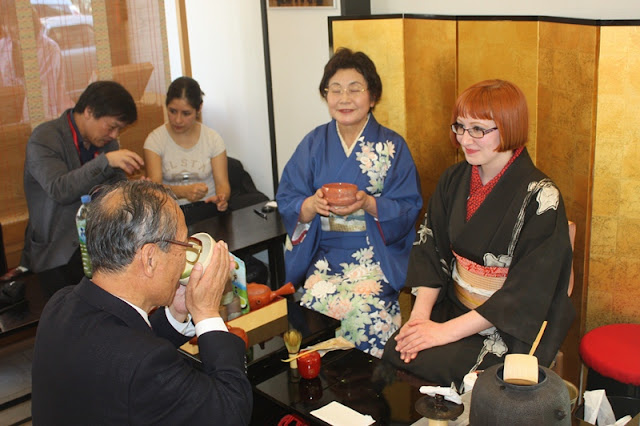 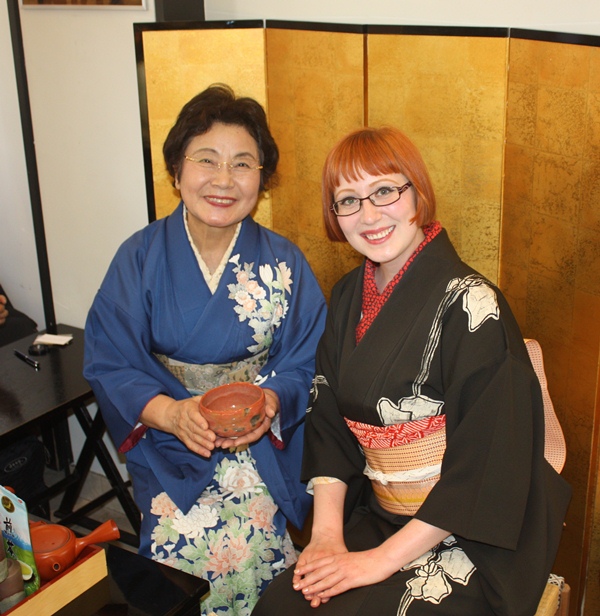 Mrs. Green Tea complimented me on my coordination, saying it was very traditional. Jokingly I said that I'm not very traditional and pointed to my Western boots, to which she replied that she wears boots with kimono too. How COOL is that? Coming from someone who is clearly very traditional, it means a lot to me. We also got comments from other ladies, who complimented on how traditional Talleke looks and how modern I look, saying that my style is very popular with younger women in Japan and that it suits me. :)

After that we went to get obligatory ice cream at Haagen Danz and then headed home. All of you are probably wondering (and screaming) at me about lack of photos. I will add photos this week, because right now I still have to do all my homework :( But I promise you, the photos are amazing! :P