I'm loving my new schedule at work! Not so much with actual job, but having weekends off makes me able to put up with a lot more stuff, that's why I'm not complaining lol. So this Saturday I will be going to the Okinawan Day in London and of course I will wear a kimono. Not to long ago I was reorganizing my collection, and I came by a ro komon that I completely forgot about! So I will be wearing it :) :) Hope it won't be too hot lol. 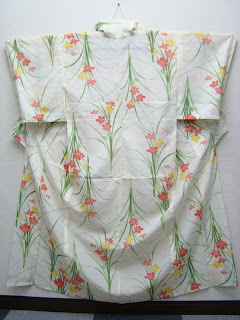 Then on July 10 I will be going to Maeda Gakuen Japanese Summer Festival. It sounds like a lot of fun and I never been to an actual Japanese Summer Festival. I even bought a new yukata and hanhaba obi specifically for this purpose, as well as whole bunch of Uchiwa. YUP, going yukata all the way! Normally I don't like yukata much but since this is an actual summer festival, and people wear yukata to those, I decided to join the crowd. ;P 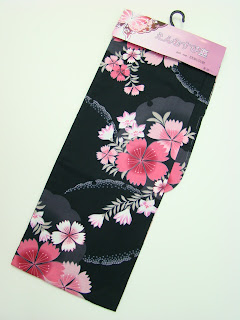 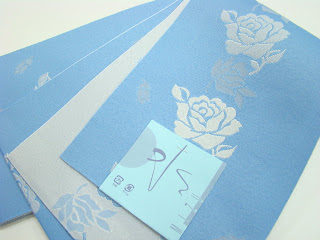 Kabuki with Ebizo Ichikawa in London

I never been to kabuki so I didn't really know what to expect... but what I saw was just WOW! After the performance I felt all happy and giggly. Don't ask me why, because I don't know lol :) It was amazing and super cool and I will go again anytime!

Since kabuki is a pretty formal occasion, April and I decided to go with our most formal ro kimono that we had. Just so happens, that both of us had tsukesage. I bought mine a while ago, and it is my only purple one too haha, but never got chance to wear it yet. Unfortunately the only ro obi I had was a nagoya, a little less formal but I decided to go for it anyways. After all, how many people will wear a kimono there to begin with? Turned out that we were absolutely right. Some people showed up in homongi or tsukesage, and others in komon. Some came in nice gowns and others in jeans and t-shirts.

While there we were instantly surrounded by people wanting to take pictures with us :) Even official kabuki photographer wanted to take pictures. I gave him April's card (because I didn't have mine with me) and asked to email us photos. I can't wait to see them and hope he emails them soon! LOL April even asked him if we could meet the actors. Poor guy, he was trying so hard to come up with a polite way of saying NO in English.... Oh those Japanese and their inability to say NO lol.

One thing I learned from wearing this particular kimono, is that it is a lot more transparent than I thought! Next time I will have to wear a different juban with it, one that preferably has some designs on it. And good thing I recently bought one like that! And it's ro too :)

Here are the photos :) Most of them were shamelessly stolen from April, because my camera started to act funky and I couldn't use it :(

First we went to get some lunch :) 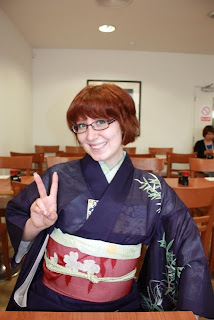 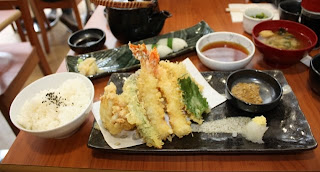 Then April gave me a tour of a very famous toy store, but I forgot the name :( 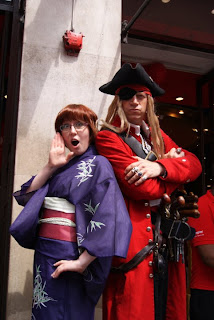 And we saw these cute elephants :) 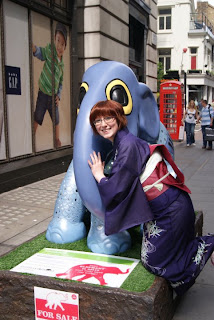 And met one of the supporting actors. Although there were not that many of them to begin with :) He was hanging out by the employee/performers entrance. 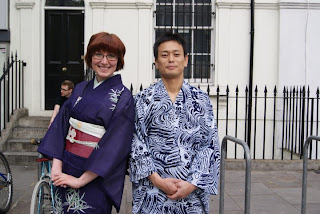 We were drooling over her kimono :) 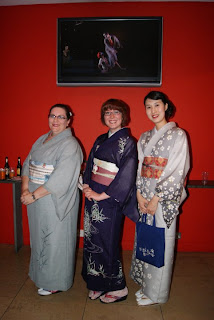 And made a new friend. He used to sell kimono in Japan. 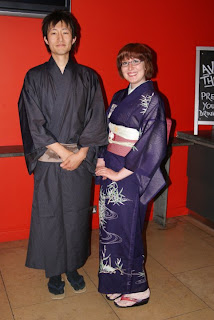 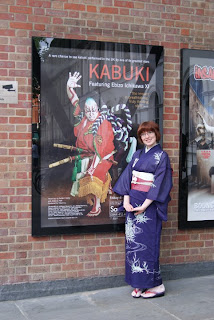 We couldn't resist trying to replicate the pose from the poster ;P 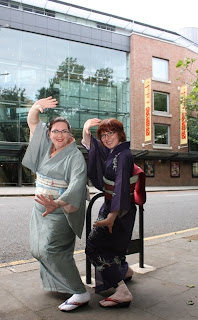