Kimono de Jack is taking the world by storm. Well, at least the kimono world. Either way, when it started back in 2010, only 11 people showed up. Now, there seem to be more than one KDJ in every prefecture in Japan, with people showing up in HUNDREDS! Oh how I wish I lived in Japan to attend of their Kimono de Jack. I've never seen that many people in kimono in one place at one time, and I think the experience would be amazing!

Although most of us, Westerners, don't live in Japan, it doesn't mean that we can't have our own Kimono de Jack in whatever country we live in. I started one in UK, and once I leave, I'm pretty sure I will be starting another one in whichever place we end up. So this is my guide on what to do. Take it with the grain of salt though, because YOUR situation might be different than mine (and because all of these are my opinions, and don't necessarily mean that you will agree with me).

Kimono de Jack is an event for people who love kimono and need more reasons to wear it.

1. If you find yourself thinking "Oh how cool, UK has KDJ. New York City has KDJ. I wish SOMEONE would start a KDJ in MY area!!!", stop thinking that and START ONE!
Yup, be the one to do it! Even if you have no friends, and know of no kimono enthusiasts in your area. Kimono de Jack is meant to be just another reason to wear kimono, so wear kimono, call it KDJ, go hang out in the bookstore or whatever place you like to hang out at. If you do it often and regularly, people will start asking questions and who knows, maybe you will meet new kimono enthusiasts that way. I know I did back when I lived in FL, and spend all my free time in the bookstore and I didn't even try to start any KDJ.

2. Contact Akagi Mihiro, the founder, and get his official permission.
You can find him on FB, or on his website KimonoJack although it is in Japanese and I'm not sure if it has a "contact me" button. Either way, it's not that hard to get a hold of him and he will be ecstatic for another foreign KDJ, trust me!

3. Agree to follow three simple rules:
- Do not try to sell anything at Kimono de Jack.
- Do not use KDJ as platform for discussing or promoting religion or politics.
- Let the headquarters (aka Akagi Mihiro) know about your events (see #5).

4. Create twitter account (and add all the foreign KDJs, because I'm tired of my twitter feed being filled with Japanese, which I don't understand - optional to add me, but highly encouraged).
The very first KDJ was advertised on twitter, and I believe it is still used as the main advertising platform. So by getting a twitter account, you're following the tradition set by the Mighty 11!

5. Create a Facebook group.
This is actually optional, but chances are your KDJ will never reach hundreds of people, so FB offers a nice way of organizing events and interacting with the members. It is also a nice way of letting Akagi know about your events, because you can just add him to the group and voila, he will get automatically invited to every event!

6. Create a blog and a website, and update it before and after each event.
I consider this to be very important, because your blog will reach people who might not have Facebook. It will probably show up in searches too. And you can point people you've just met to your blog, instead of FB (because what if they don't have or don't want a FB account?).


7. Decide on how often you want to hold KDJ.
I admit, I am hung up on the once a month thing, but that's just me. You don't have to do it that way, you can have it once every 3 month, or twice a year. I also have to admit that I strongly believe that KDJ should be more than once a year, because holding it just once a year doesn't leave that strong of an impact. People forget, and you want to keep KDJ out there and fresh in memory.

8. Decide on a place to meet.
Yes, YOU decide on a place to meet. Don't wait for other to do it, don't even ask their opinion because you will never get a definite answer. At least do it for the first KDJ, to get things started. After you get a group of people that you know you can count on, then ask. Until then, it's all on you.


9. Get a business card and carry it with you EVERYWHERE!
I have both business cards and postcards made for KJD, and I carry them everywhere with me. I can't tell you how many times I had an opportunity to start a conversation about kimono, or KDJ, or Japan, and at the end I just hand out my business card so people could follow up if they wanted. Or contact us. 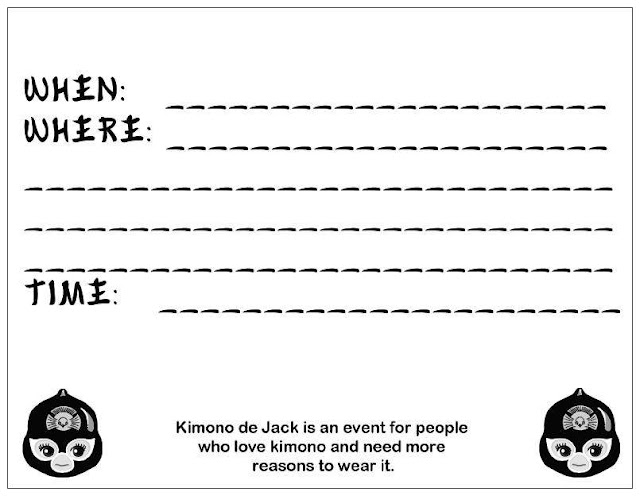 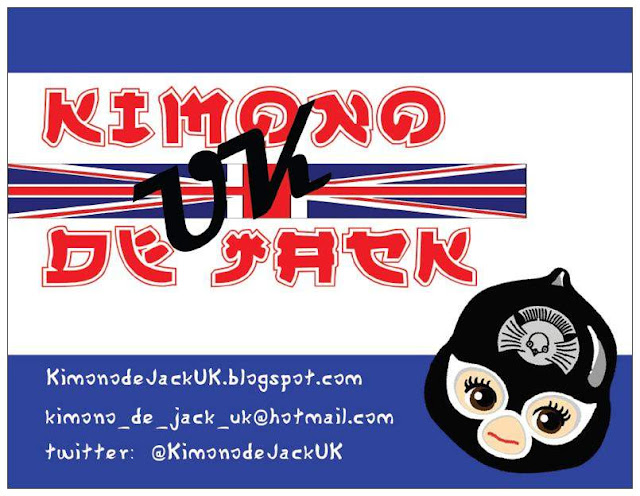 If you want that creepy monkey logo, you can ask Akagi to email it to you. Or you can ask me and I will be happy to pass it on.

10. Prepare to be disappointed.
People will not show up, that's all there to it. Even people that expressed OMG I WOULD LOVE TO COME WHEN IS THE NEXT ONE will just leave you hanging out by yourself. I've had to hang out with just me, myself, and Starbucks once, and yes, I was upset. It taught me a lesson. So now I don't go to that area anymore, and instead just plan on either specifically hanging out on my own (because KDJ can be with just ONE person), or make sure that at least some of our regular people can get to the area.

11. Prepare to commit.
If you are the organizer, BE THERE! At least at the beginning, when you just starting things out. I don't go to every KDJ now because some of them are just too far away from me, but I know that my other group members will be there for sure. Until you get to the point of where you can count on other people, it is all on you to show up. Even if you experience #10.

12. Don't plan KDJ just around Japanese events in your area.
I admit that it is easier to do it if your KDJ is only twice a year, but if you decide to go hardcore like me and have it every month, chances are you will run out of the events to go to. If that's the case, then go to NON-Japanese events, or don't go to any events and just hang out in kimono and take photos.

13. Become friends with the Japanese organizations in your area.
Ask if they will let you leave some business cards there, get on their mailing lists to get all the latest info, talk non-stop about kimono and KDJ, etc...

14. Get in the habit of searching your city's events calendar and keep an eye out for any possible places to go.
Even if they are not Japanese (see #12).

That's all I have for now. If you think I need to add anything else, or just have a comment about this guide, just let me know :)