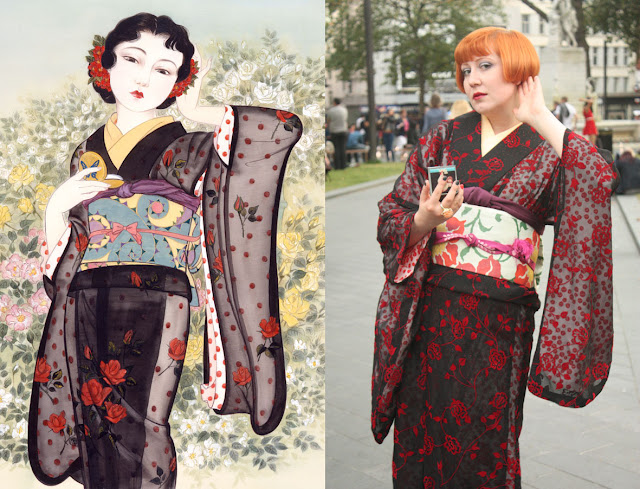 Few month ago Hong showed me the above picture and said that she really wants to make a kimono like that, if she can find the fabric. Fast forward a little, and she found fabric that looked similar enough. Then she told me that she will give the kimono to me because I will definitely rock it, and my jaw absolutely dropped to the ground. Incidentally, I had a similar juban, same color haneri and obiage. The only thing missing is the obi, because surprise, surprise, I don't have any in yellow and blue combo.

We were looking for a chance to wear this kimono and replicate the photo, but because of her wedding and my school work, we were pretty busy for the past month. The opportunity came about when I found out that Yumi Yamamoto will visit London for a few days. As many of you know, back in 2010 I got to meet Yumi Yamamoto at one of the Japanese festivals in London. Every year around September she comes to Paris, and every year since then I say that I'll go and see her again. And every year something comes up that prevents me from going. Well this year there was a possibility that she would come to London again, not for a festival, but just to visit. It was up in the air, but last week I got an official confirmation that she was coming, so we made plans to meet up. I thought it would be a perfect opportunity to wear this kimono that Aoi made, and also for her to wear a kimono that she made, to meet Yumi. After all, both kimono were made using her first book.
We met up in London and went to get some traditional afternoon tea, but I don't have any photos yet unfortunately. Lets just say it was super yummy, the place was great and I want to come back. Afterwords we went to do some window shopping, and Tomoko wanted to check out a chocolate store. I had no idea which one, but when we walked in, it was FABULOUS. Apparently it has a TV show too, but I've never seen it. The name is Choccywoccydoodah btw. Of course we proceeded to take photos with the fabulous chair and couch that they had there. 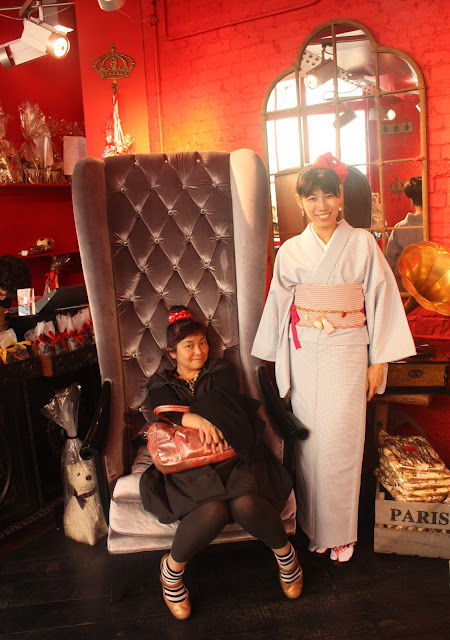 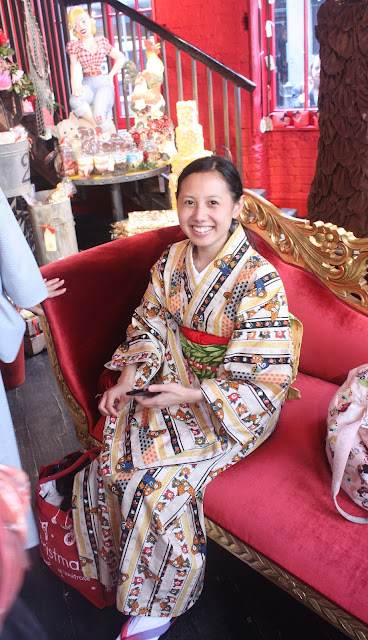 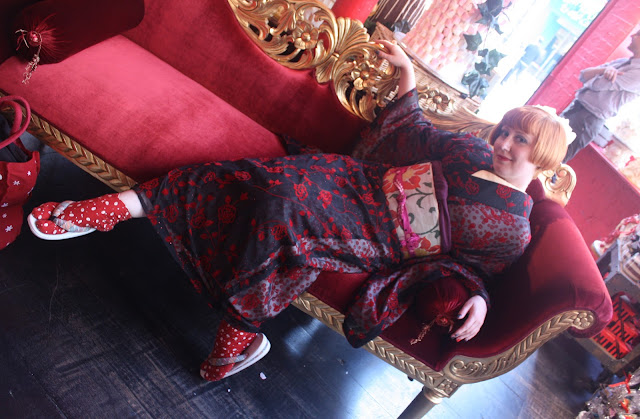 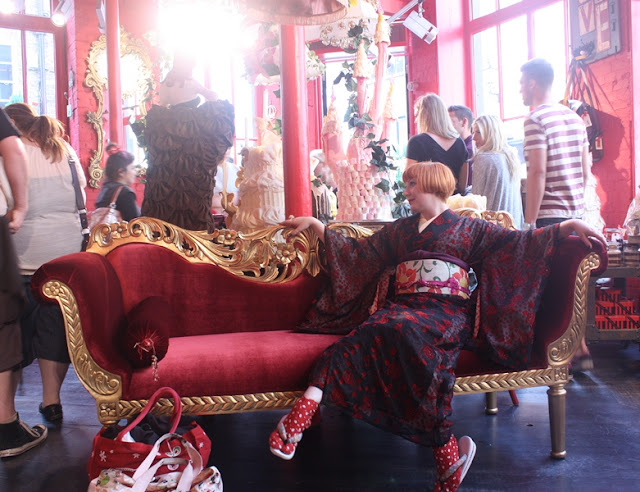 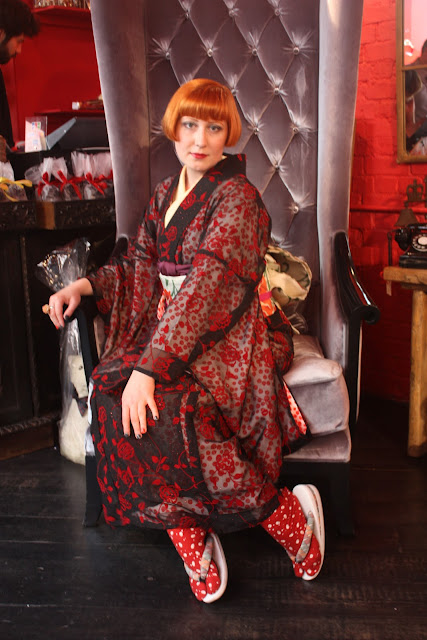 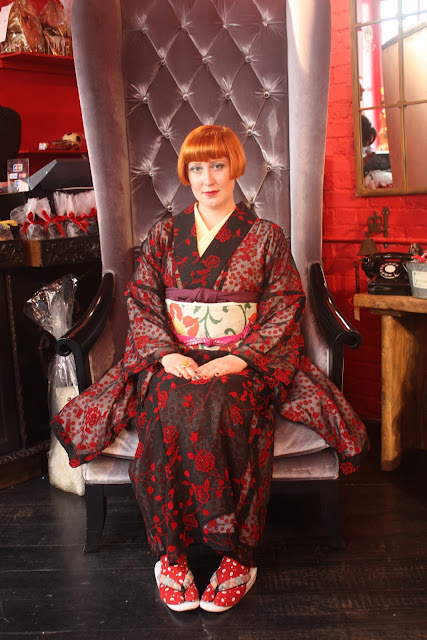 After that we went to Liberty right during the first day opening of their Christmas Shop. We geeked out over all the cute Christmas decorations and took pictures with the awesome reindeer. 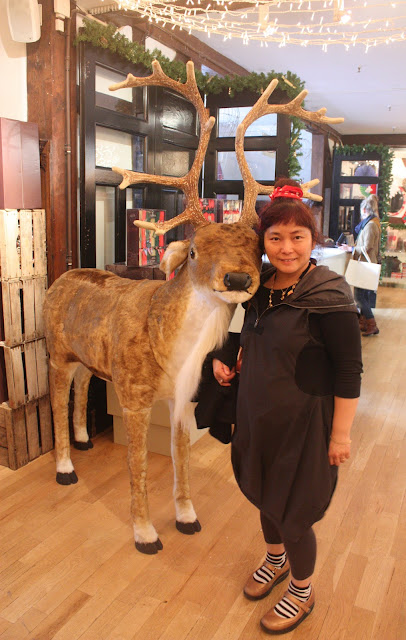 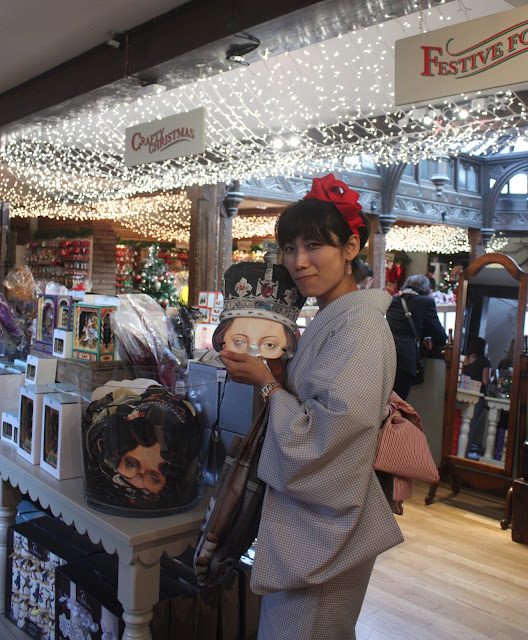 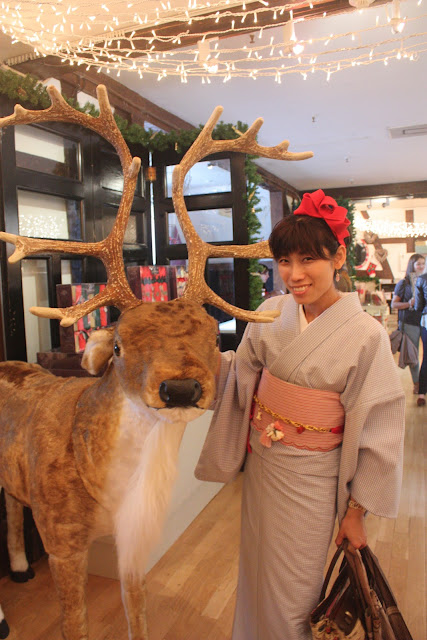 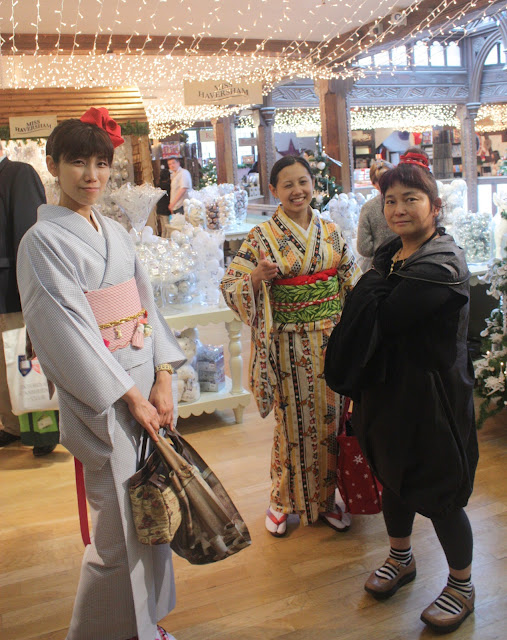 Of course no London trip is complete without a stop at Haagen Danz, so after Liberty we headed there. To finish up we goofed off at the Leicester Square and took goofy photos. 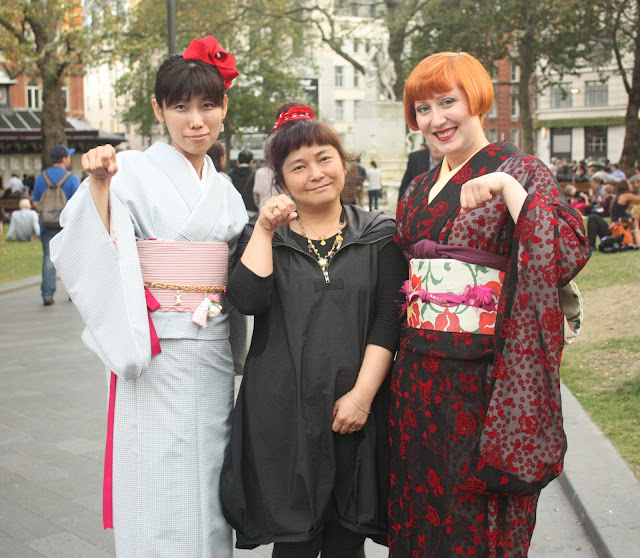 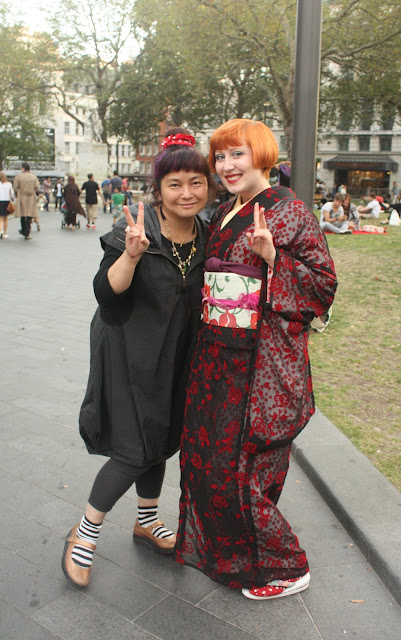 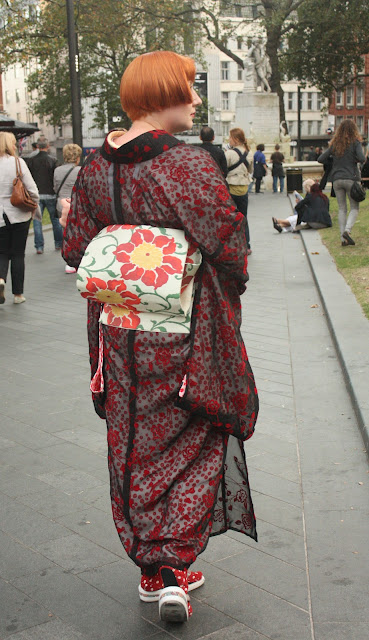 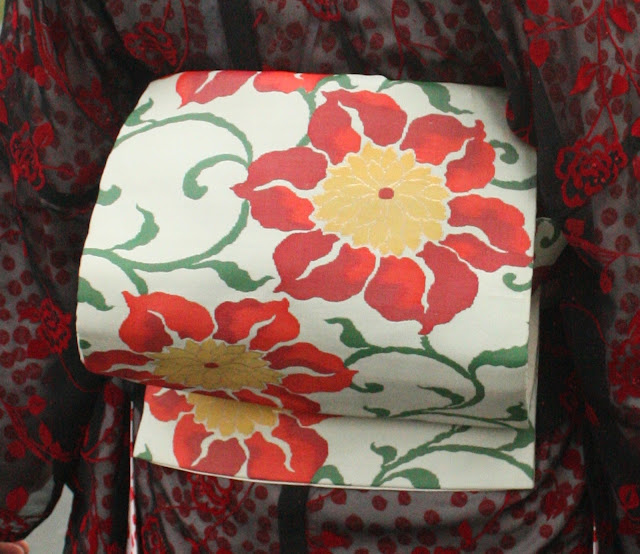 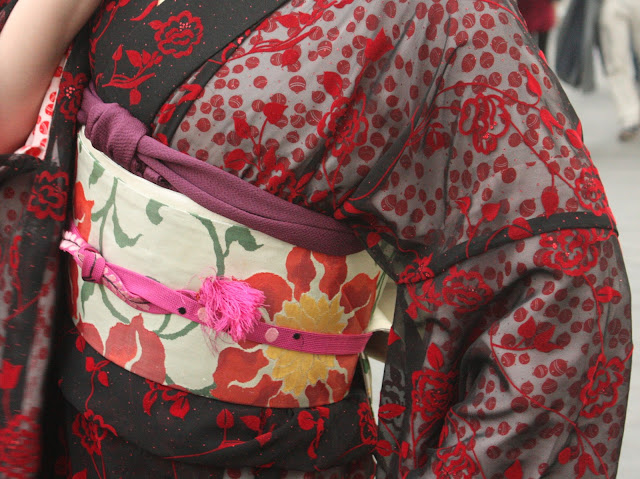 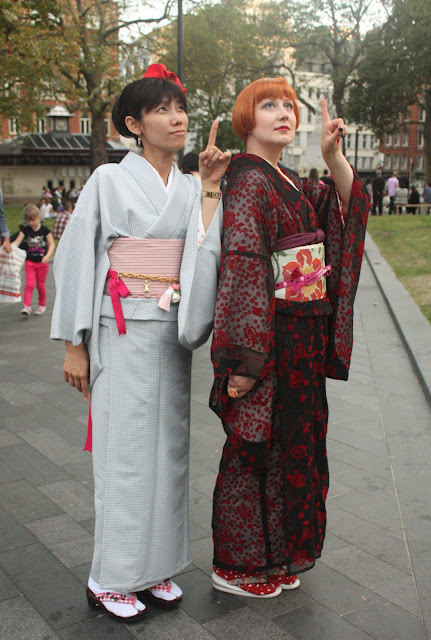 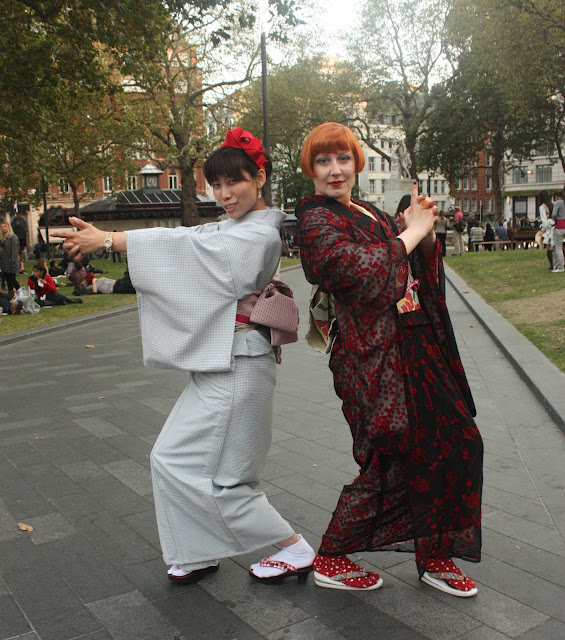 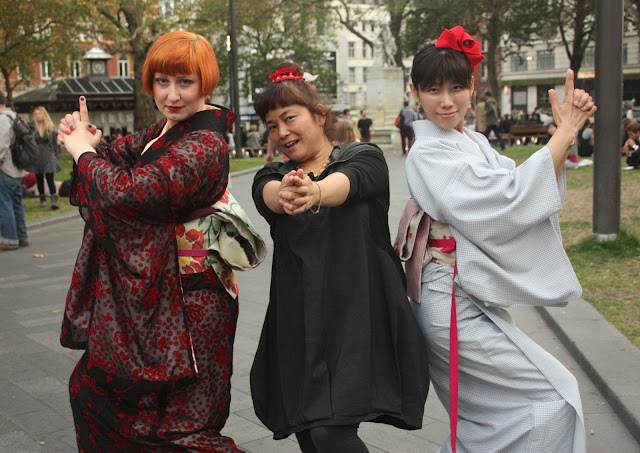