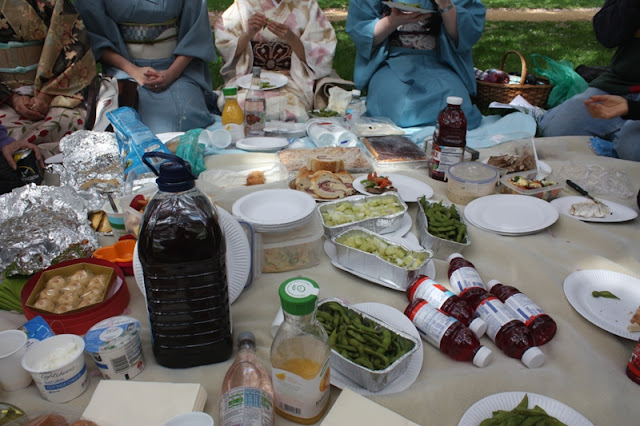 When Japanese Conversation Group people started showing up, they stopped by our picnic first asking if we were Japanese Conversation Group, but when finding out that we were not.. they kept walking. Apparently there was some confusion, (and I suspect the organizer guy I emailed didn't show up early enough to explain everything) but they set up in a different place, NOT under cherry trees and didn't want to join us even if we offered several invites. Can you tell I'm just a LITTLE BIT bitter about that? Oh well, we got the best spot in the place and we had more fun! We did get 3 people that decided to sit with us though, I hope we'll see them again at some other events! :) 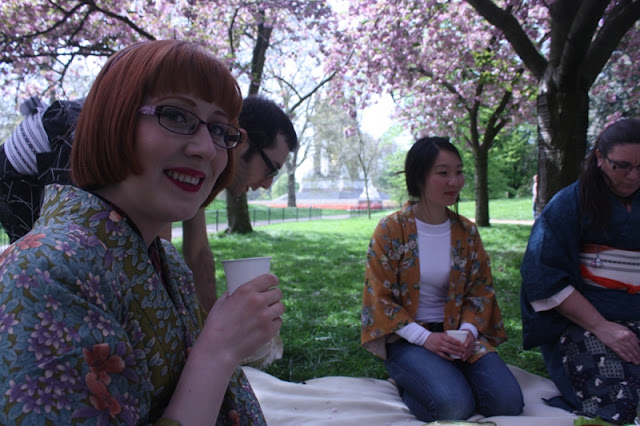 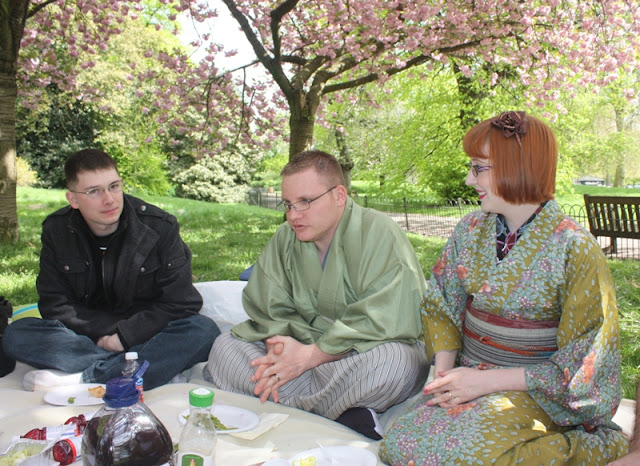 For the picnic I decided to wear my green komon, which I bought a long time ago (I think it went through 2 springs without love?) but never got a chance to wear. Actually I did wear it few weeks ago for Japan Day in Cambridge, but since that turned out to be a fiasco of a kind... I never took any photos. And if there are not photos, it doesn't count right? 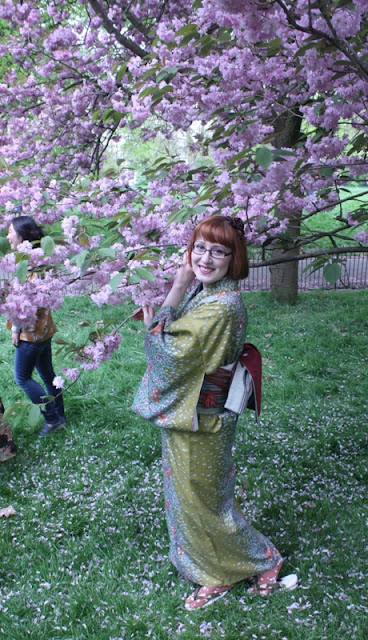 Originally I was going to pair it up with my trusty purple nagoya obi, but the day before Hanami I had an A-HA moment when I saw this kimono next to my newest cotton fukuro. I thought they were perfect together, and the simplicity of this obi balanced out the business of my kimono quite nicely. Plus, I wanted to match with my husband who at the last minuted decided to wear hakama after all... and his grey striped hakama matched my grey striped fukuro quite nicely. :) 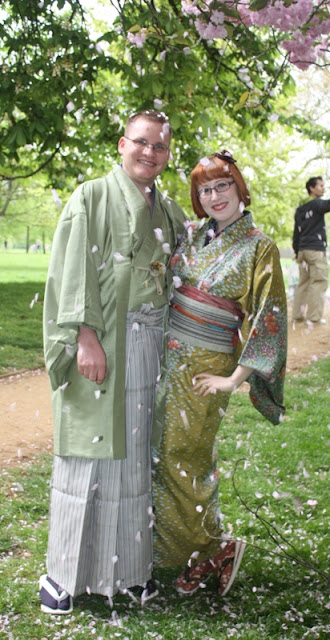 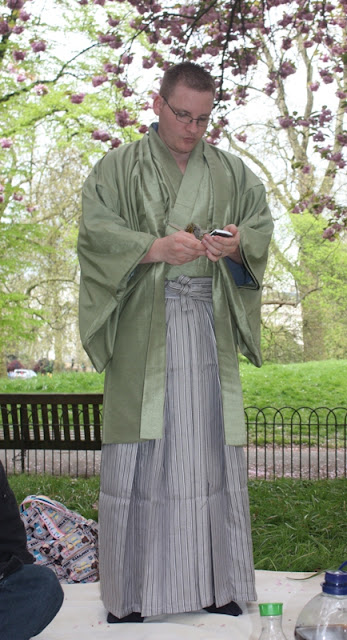 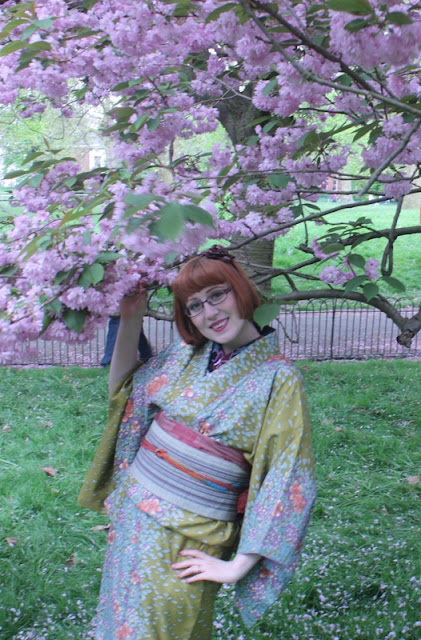 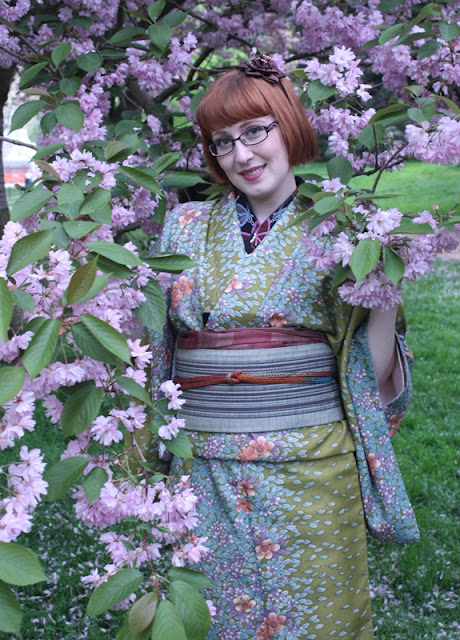 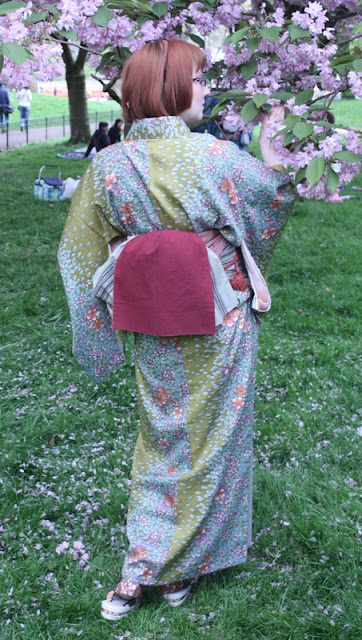 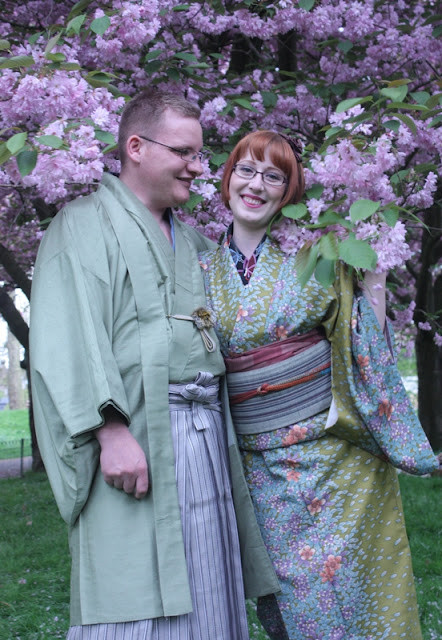 For obiage and obijime I choose one of my favorite dark red ones because it matched the back of fukuro perfectly. And of course I had to wear my sakura tabi :) 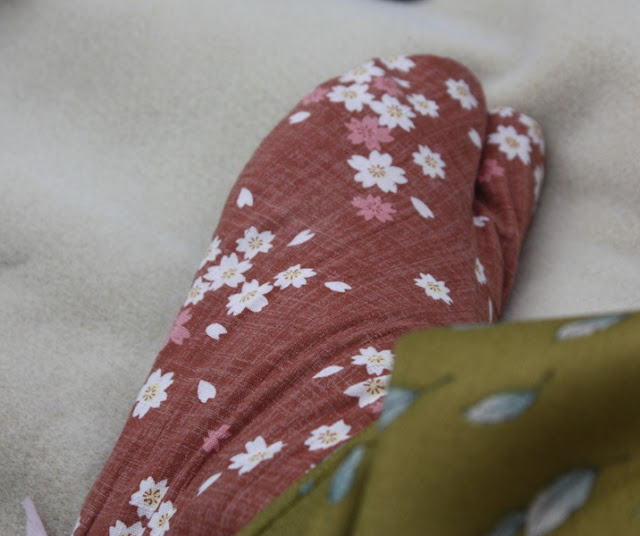 After we were done eating, we started taking pictures and all kinds of goofing off. :) 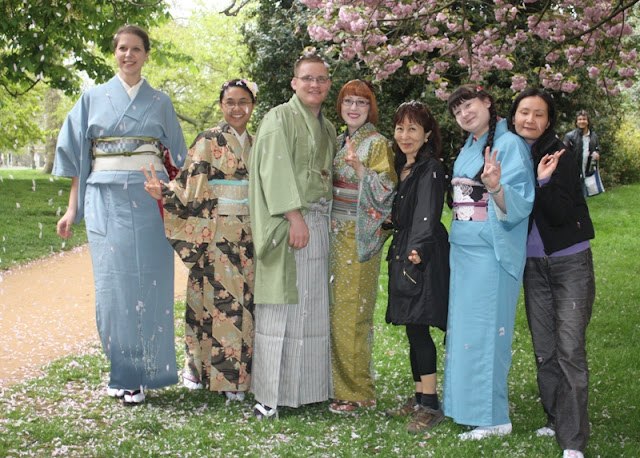 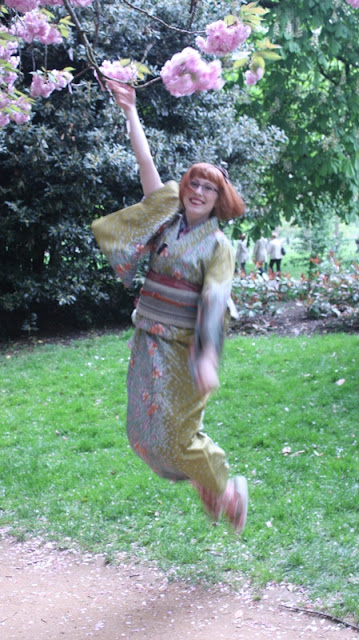 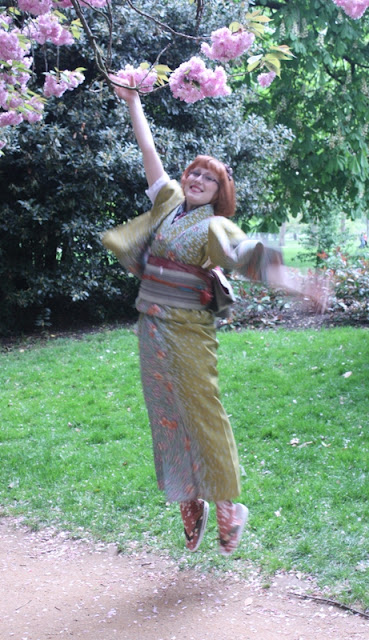 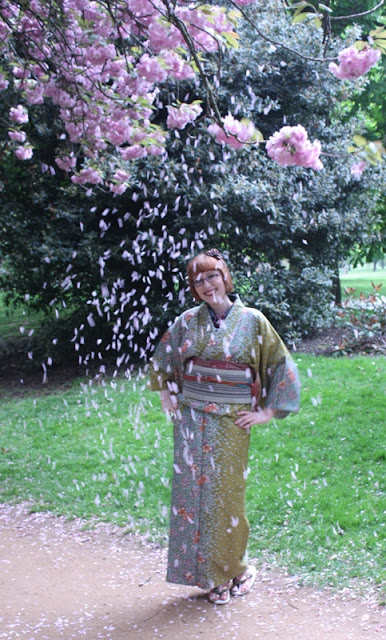 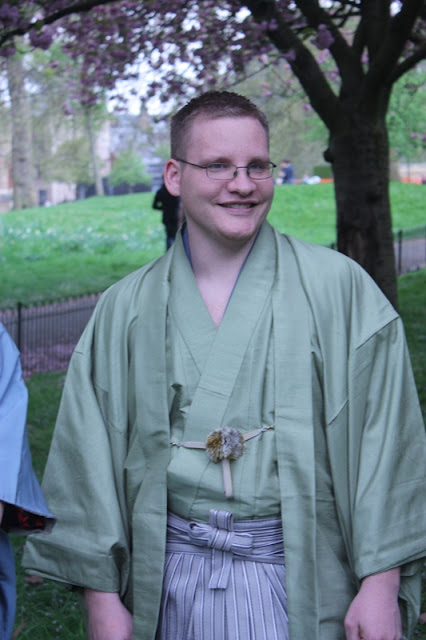 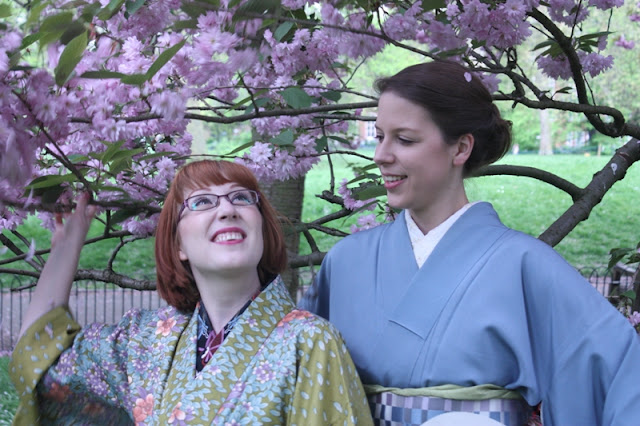 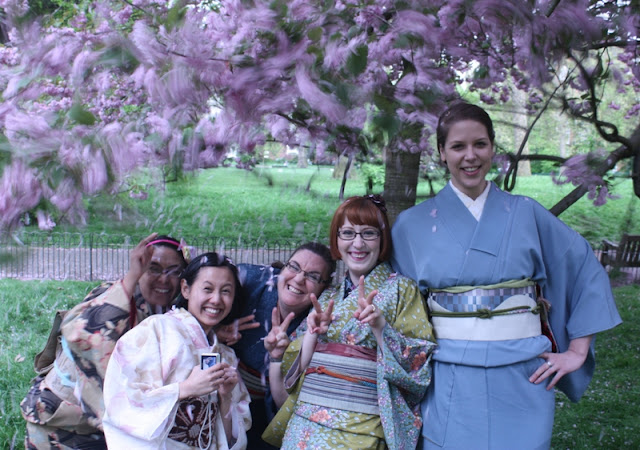 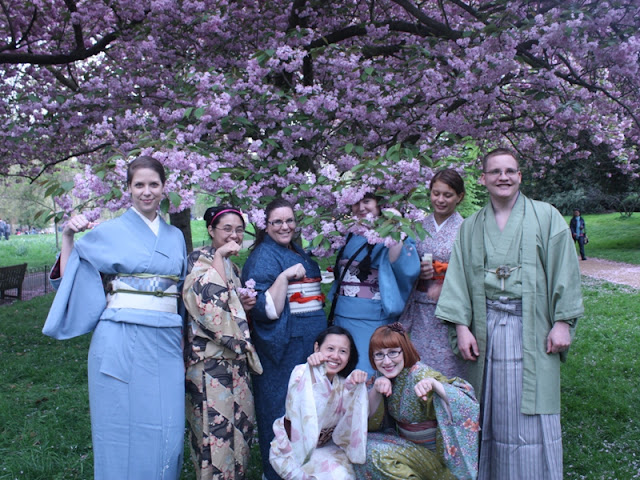 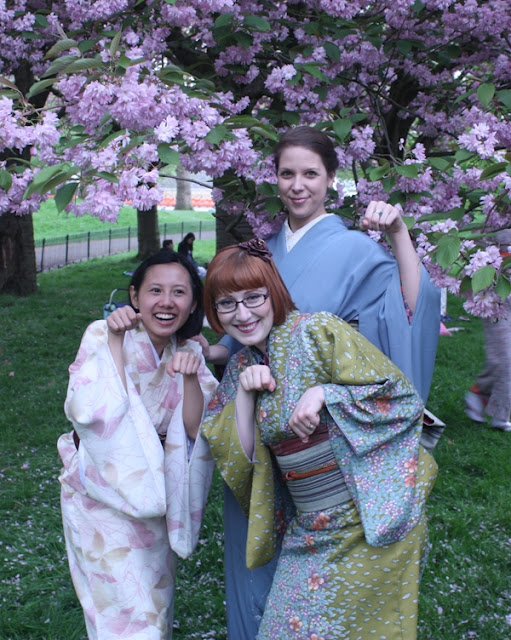 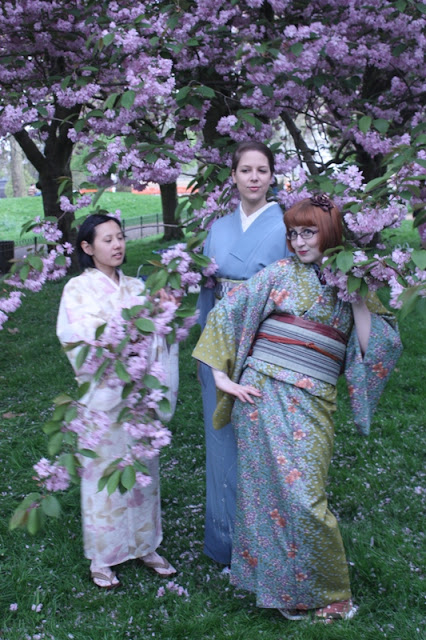 Overall, I would say this was our most successful Kimono de Jack event up to date, and I think we should definitely make this an annual thing!